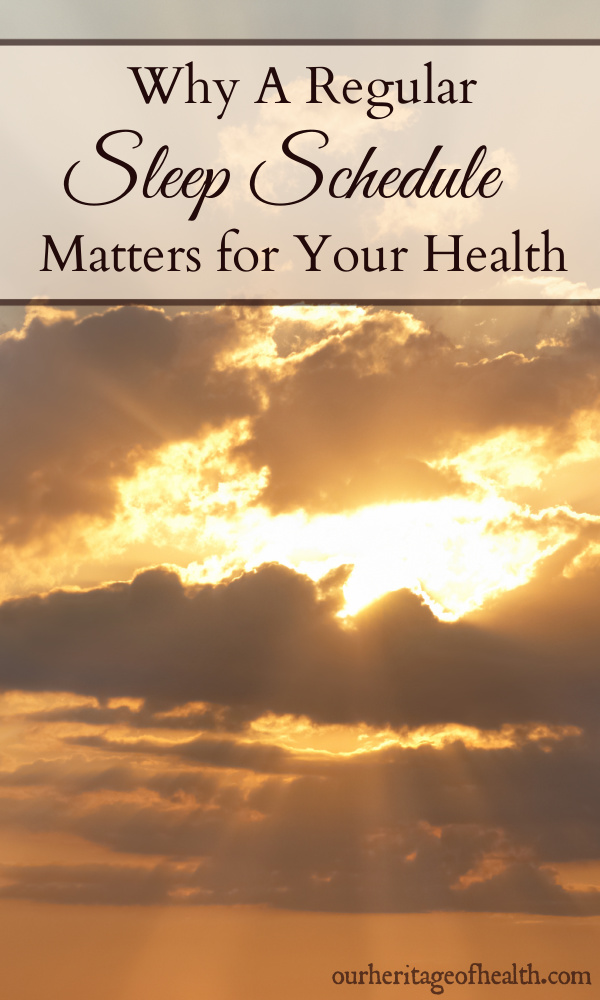 Early to bed, early to rise . . . And you know the rest. Every time I hear Ben Franklin’s famous quote, “Early to bed, early to rise makes a man healthy, wealthy, and wise,” it sounds like a good idea, but I never seem able to actually follow that practice in reality. Sure, I’d like to be healthy, wealthy, and wise, but can’t I be all of those things and still stay up late and sleep in late? Is it really that important to go to bed early and rise with the sun and does having a regular sleep schedule actually matter for your health?

Something Needs to Change

I’ve never really considered myself to be a morning person. It’s much easier for me to stay up past midnight than it is for me to wake up at dawn. As much as I’ve tried to convince myself that there’s nothing wrong with my night owl habits, though, my inability to wake up feeling rested tells me otherwise.

Even when I’ve had a full eight or more hours of sleep, I often still feel tired when I wake up. I usually end up pressing the snooze button on my alarm clock several times and then dragging myself out of bed in a haze of drowsiness. Something definitely needs to change.

Is Early Rising Actually Better for Your Health?

I used to think that there was no physical benefit to going to bed and waking up early. I thought that, as long as I got my seven or eight hours, it didn’t matter when I went to bed and when I woke up. I’m starting to think differently now, though, especially since I often still feel so drowsy after getting a full night’s sleep.

It seems to have been a common consensus among people who lived in past centuries that going to bed and rising with the sun is a habit that will help you to have a healthier life.

In the days before electricity, most people didn’t stay up very late at night. While it’s true that they could light candles or lanterns or sit by the fireplace to read or sew or play games, most people wouldn’t have been able to afford to waste their candles and lamp oil by staying up for hours after the sun had set.

It used to just be the natural thing for people to go to bed when it was dark out and to wake up when the sun rose and it was light out. Now that we have electricity, though, most people stay up well past sunset (and often even well past midnight) watching TV, reading, doing work, etc.

It was only within the last century that it became a regular habit for people to stay up so late, continuing with their work or entertainment hours long after the sun had already set for the day.

Staying Up Late Can Disrupt the Body’s Natural Sleep Cycles

Staying up late at night can disrupt the body’s natural sleep cycles, though. Since the body’s circadian rhythm is attuned to the signals of light and dark, ignoring those signals by staying awake for hours after the sun has set can confuse your body, making it a lot harder to get a restful night of sleep.

And since sleep is the time when your body is at rest and able to focus on regeneration and repair, it’s really important to make sure that you’re not confusing your body’s sleep cycles.

A Treatise on Anatomy, Physiology, and Hygiene, a book published in 1853, includes a section about the importance of sleep for repairing and restoring the body’s systems.

“The natural inclination of man to sleep, is in the stilly hour of night, when all nature reposes, and to be in action during the light of day. An inversion of this law of rest causes greater exhaustion of the system than the same amount of exertion during daylight (pg 92).”

It’s important to try to go to bed and wake up at approximately the same time each day, and, unless you’re sick and need the extra sleep, it’s really not the best idea to sleep in a lot later, even on the weekends. This is something I have a really, really hard time with because it’s so tempting to sleep for a lot longer, but I know that I need to try to work on sticking to a more regular and consistent sleep schedule.

In The Family Nurse, written by Lydia Maria Chile in 1867, Mrs. Child says:

“Rise early, and retire to rest in good season. Regularity in food and sleep is a great preservative of health.”

Regularity in sleeping habits is something I’ve always struggled with. I go to bed and wake up early on the days that I have to get up early, but, on the days when I don’t have to wake up early . . . I usually sleep in much later than I should.

I find myself thinking, “Oh, I don’t have to wake up early tomorrow. I can stay up later tonight and get some more stuff done!” Yeah . . . that never actually happens. What really happens is that I don’t ever get as much done as I had thought I would late at night, and then I just wake up feeling tired and like I’m in a daze the next morning.

Your body’s sleep cycle probably won’t be too disrupted if you got to bed a half hour or even an hour later than usual one night, but it probably will be disrupted if you stay up several hours later than you usually do and then sleep in until noontime the next morning to try to make up for it. And even if you end up having to do that once in a great while, it isn’t nearly as bad as having a constantly changing routine.

Depending on your work schedule and family needs, though, it might be impossible for you to go to bed and wake up at exactly the same time every day. It’s not worth stressing over the exact minute that your turn off your light to go to bed, but it is important to try to keep to the same approximate schedule if you can. I know that that might not be possible for everyone, and if that’s not realistic for you right now with the stage of life that you are in, then don’t worry about it, and just try to make it a goal to strive for in the future when your schedule allows.

How Early Is Early?

I think the definition of “early” depends on each person, and of course your schedule and stage of life will have a big part in this, too. Your body will usually tell you when you’re staying up too late, though.

I don’t know how many times I’ve fought past the “too tired to keep my eyes open” feeling, blinking every second to try to keep myself awake so I can read “just a few more pages” of my book. And then, before I know it, it’s 2:00 am, and I’ve finished my book, but I’m too exhausted the next morning to get up because I stayed up far later than my body wanted me to.

The best thing to do is to try to go to bed before you get that overly-tired feeling, or at least to listen to your body and go to sleep when it tells you you’re too tired to stay up any longer. Trying to fight that tiredness to get more things done will only make you even more tired the next morning and less productive the next day.

With my schedule, it’s usually not practical for me to go to bed much earlier than 10:30 or 11:00pm. No matter how hard I might try to go to bed earlier than that, it just doesn’t ever seem to happen. So, a realistic goal is for me would be to try to be in bed somewhere around 11:00ish.

For some people, though, “early” might mean going to bed at 9:00 or 10:00 and waking up at 5:00 or 6:00. For those who are true “morning people” and can get up super early, that’s great! For the rest of us “night owls” who dread the idea of waking up with the sunrise, though, the important thing is just to get up as early as possible and to keep to a regular schedule.

Would Ben Franklin Approve of Your Sleep Schedule?

This post is linked to Sunday School at Butter Believer and Fight Back Friday at Food Renegade.

[…] tables either. Even though I know how important sleeping is for good health and I try to follow the “early to bed, early to rise” principle, it just doesn’t always happen. Just the other night I fell asleep on the couch and […]

The 30-Day Sleep Challenge | Our Heritage of Health

[…] did pretty well in the beginning with trying to go to bed early and follow the “early to bed, early to rise” principle, but . . . then I kind of dropped the ball. Little by little I slowly slipped back into […]