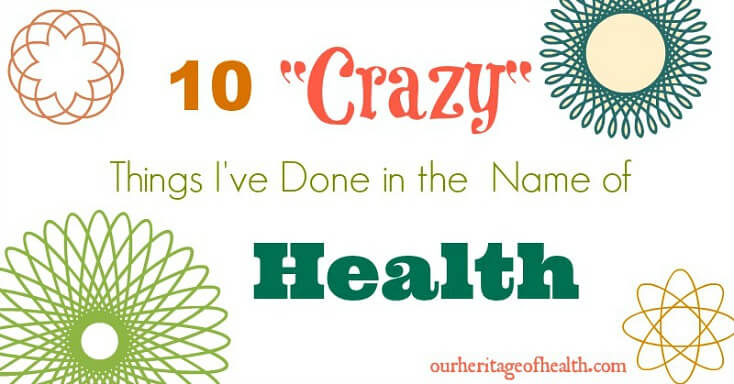 I was just thinking recently about all of the changes that I’ve made in the past year or so in the name of health, and I realized how incredibly weird some of those changes would have seemed to me just a couple of years ago!

The majority of my friends and family good-naturedly make fun of me for being the “crazy” one who buys organic food and does things naturally.

I’m so used to doing these things now, though, that they seem completely normal to me. And, chances are if you’re reading this post, that you maybe does some of these same “crazy” things too 🙂

I might not live near a grist mill, but I enjoy freshly ground grains every week for my homemade sourdough bread and baked goods. I bought a hand-crank grain grinder last year, and I’ve been using it on a regular basis ever since.

I love the fact that I know my flour is fresh and hasn’t been sitting around on a store shelf for months on end (potentially starting to go rancid in the case of whole grain flours), and I really like being able to choose how much bran to leave in or sift out so that I can have a mix between a true whole grain flour or a more refined flour depending on what I am baking.

You can read more about my reasons for getting a grain grinder and my recommendations for the type of grinder I bought here.

2) I Put Chicken Feet in my Broth

A few years ago, I never would have thought that I would be making my own broth, let alone putting chicken feet in it! Now, though, my kitchen looks like it’s Halloween every time I make a pot of broth. I can’t believe I ever used to waste the bones of a chicken or turkey carcass by throwing them away when I could have used them to make a nourishing, homemade broth free from the MSG and other additives that are often hiding in store-bought broths.

The little farm where I buy my pastured eggs sells chicken feet, so whenever I go to get eggs, I grab a package of chicken feet to keep in the freezer for the next time I make broth.

If you can get over how weird it looks to see chicken feet floating in your broth, they make the broth very rich and they add a lot of additional gelatin to the broth. Whenever I use chicken feet in my broth, it solidifies in the fridge just like jello!

3) I Use a Himalayan Salt Lamp

When my mother found out I had bought myself a salt lamp, she literally laughed out loud. I tried to tell her about how the negative ions help to freshen and purify the air like pure beeswax candles do, but she just gave me a “that’s nice, but I still think you’re crazy” kind of look.

It could just be my imagination, but I really do think that the air in the room with the salt lamp feels a little fresher and cleaner than the air in rooms without the lamp. It’s a little bit like the way the air feels after a refreshing rainstorm.

Either way, though, the lamp gives off a warm, relaxing glow, and the pink crystal is really pretty to look at, so I would like it even if it didn’t have any air freshening benefits 🙂

You can find lots of different Himalayan salt lamps here:

It sounds pretty disgusting, I know, and a few years ago I never, ever, would have considered taking it, but now I take it every day for it’s anti-inflammatory essential fatty acids and it’s natural supply of vitamins A and D.

You don’t see cod liver very often nowadays, but it’s a very traditional supplement that people 100 years would have thought was perfectly normal to have. The one I like best is an old-fashioned cod liver oil that’s extra virgin and unrefined so that the natural vitamins stay intact. You can find the kind I buy here.

5) I Use a Shower Filter

The water where I live is pretty hard, and my town adds flouride, chlorine, and who-know-what other chemicals to it, so once I found out that you could buy filters to attach to your shower head, I decided to get one and try it out.

The first difference I noticed was in the smell of the water. It smelled cleaner, and it didn’t really smell like anything. I hadn’t really realized that it smelled like chlorine until I installed the filter and then it didn’t smell like it anymore.

I found myself breathing more easily too while in the shower. A lot of the time I would find my nose getting stuffed up after I had taken a shower, or I would cough a lot, but my nose and throat feel much less bothered now. It was another one of those things that I hadn’t even realized until after I had installed the filter. And as an added bonus, I also noticed that my hair felt softer, and it was easier to brush out too.

I still brush my teeth, but I use an herbal tooth powder

now, instead of toothpaste. Once I read the book, Cure Tooth Decay

, I realized that my toothpaste was probably doing more harm than good, and it certainly hadn’t done anything to keep me from getting cavities when I went to the dentist, either!

Since I’ve switched to using natural tooth powder, and since I’ve focused on eating, real, nourishing foods instead of the junk I used to eat, my teeth are healthier than they’ve been in quite a long, long while.

7) I Make My Own Beauty Products

Up until just recently, all of my beauty products came from the personal care aisle of the drugstore, but now just about all of them come from my kitchen instead. I used to think that only store-bought products would work well, but once I realized how full of chemicals and preservatives and artificial fragrances they were, I switched to making my own with natural and even edible ingredients.

Two of my favorite DIY beauty recipes to make are this homemade deodorant from Thank Your Body and this whipped coconut oil body butter recipe from The Nourished Life. I also have fun using essential oils to make homemade perfume like this citrus lavender one.

8) I Use Eye-Strain Reducing Glasses

I spend a lot of time staring at a computer screen on a daily basis, and my eyes tend to get really tired even when I try to remember to take breaks (which I probably don’t do nearly as often as I should . . .)

In addition to doing eye exercises to improve eyesight naturally, I decided to get a pair of eyestrain-reducing glasses so that I could work at the computer without my eyes getting all tired and blurry. The ones I got are amber-tinted, too, so they’re great for the evening, because they tone down the bright blue light of the screen to a more warm, reddish light that doesn’t make it harder to fall asleep at night like the harsh light from some screens can. They’re a little on the pricey side (depending on which type and style you choose), but having my eyes feel less tired is totally worth it to me!

9) I Converted to Raw Milk

Last year, I made the switch from regular, pasteurized dairy products to raw, unpasteurized milk, straight from the farm. Even though it sounds crazy to most people these days to drink milk that hasn’t been pasteurized, drinking milk raw fresh from the cow is the way that people drank milk for centuries before our modern era of food processing came about.

(Actually, though, I’m not really drinking raw milk much anymore for a few different reasons. I think I might have a sensitivity to dairy, so I’ve been avoiding most dairy lately. Also, the $10 a gallon price tag was getting a bit much for my budget, and it was getting harder and harder to find time to make the hour and a half round trip drive to the farm.)

Even though I’m not drinking raw milk at the moment, if I were drinking milk, raw milk is definitely the way I would go! The only milk I would ever consider drinking now is raw milk from healthy, grass-fed cows.

This is the one that really made my mother look at me like I had completely lost my mind when I told her. I have to admit, it does sound pretty crazy at first. I think it’s the word “earthing” that makes it sound a little bit “out there” to some people. Maybe if it were called a “grounding mat” instead it would sound more scientific.

Either way, basically what the earthing mat does is to simulate the effect of walking barefoot outside in the grass by connecting you with the ground outside and literally grounding your body, except that you can use it with bare feet inside your warm, cozy house in the winter time when the ground is all covered with snow. I keep my earthing mat right under my desk and use it whenever I’m working on my computer.

Those are the top ten things I could think of, but I’m sure there are probably many, many other “crazy” things I’ve done that I’ve forgotten 🙂 If you do any strange, weird, or crazy things in the name of being healthier, share with us in the comments! 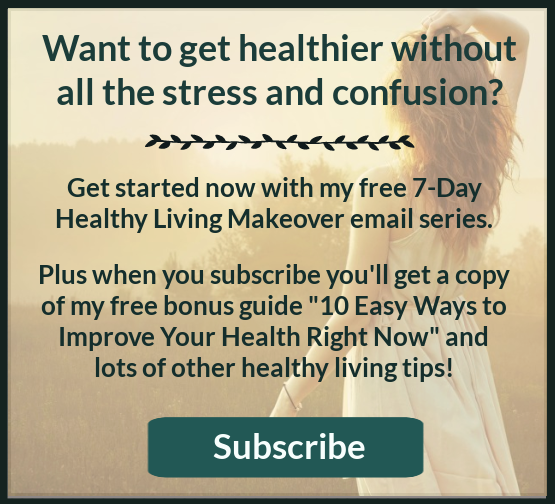 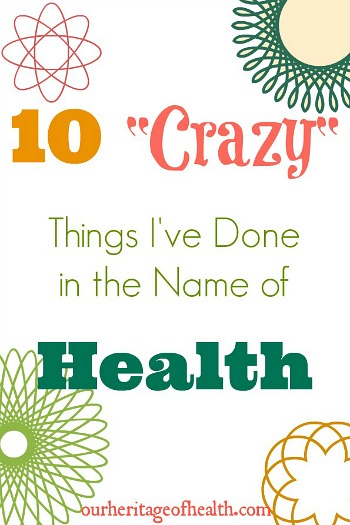 […] what I learned to bake with too. Whole wheat flour was for the “weird” people who did crazy things like buy organic food and use natural […]