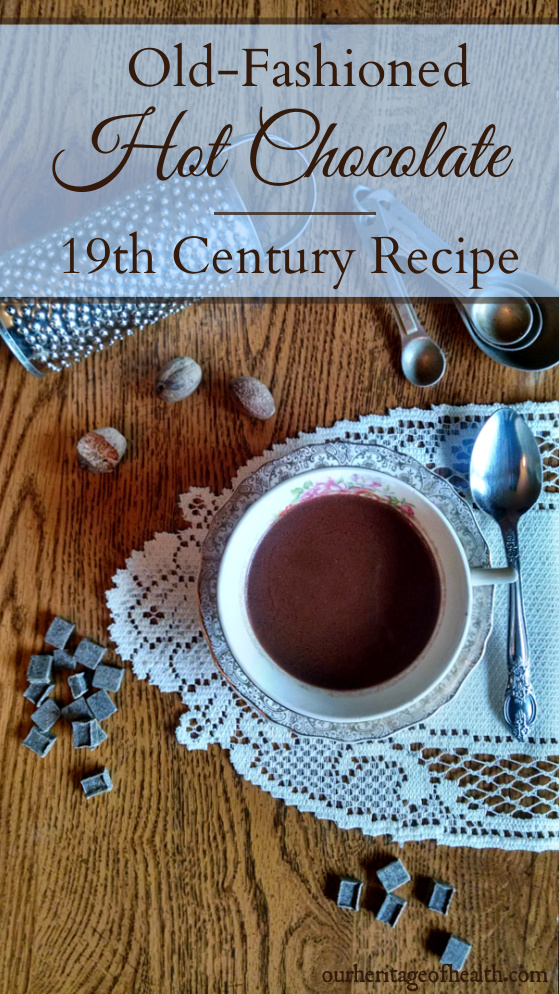 As I’ve looked through old cookbooks from the 19th century, one of the things that always stood out to me was the lack of recipes with chocolate. Modern cookbooks are usually filled with recipes for chocolate cakes and cookies and brownies, but you don’t really see any of those types of recipes until the second half of the 19th century, or at least you don’t tend to see them in American cookbooks anyways. Old-fashioned hot chocolate recipes, though, are a different story.

Even though chocolate wasn’t used for baking the same way we use it today until later on in the 19th century, people who lived before that time still got to enjoy chocolate flavor. They just enjoyed it as a beverage rather than as a cake or cookie or a candy bar.

As a chocolate lover, I always used to think it was pretty sad to see the absence of chocolate recipes whenever I looked at the baking section of old cookbooks, but it turns out that most of those same cookbooks have recipes or instructions for how to make hot chocolate as a drink. So even though people might not have been eating chocolate the same way we do today, hot chocolate was quite a popular beverage in earlier centuries.

As I saw in a demonstration once before when visiting Old Sturbridge Village, the solid chocolate was made by roasting cacao beans, husking the shells of them, and then grinding them until they formed a chocolate liqueur that would harden into a solid block of chocolate that could be grated. The Dutch process of producing cocoa that we think of today wasn’t invented until 1828, and it wasn’t until 1879 that the conching process was invented that allowed for a smooth and creamy chocolate consistency that we think of in chocolate bars today. Before that point, chocolate bars had a grittier texture than the smooth texture that we are used to now.

This video about chocolate making from the Old Sturbridge Village Youtube page shows the entire process of making chocolate the traditional way from start to finish when using cacao beans. Not everyone would have done the full process of roasting the beans and grinding them at home, though, since there were chocolate makers producing blocks of chocolate and even chocolate houses where you could go to get a drink of chocolate if you happened to live near one.

Most 19th century hot chocolate recipes that I’ve seen don’t seem nearly as sweet as modern hot chocolate either. Old-fashioned hot chocolate wasn’t a sugary sweet kid’s beverage like we often think of it today. In some ways it was more similar to coffee with people adding milk or cream and sometimes a bit of sugar to the bitter chocolate. Several old recipes don’t even mention sugar at all, which would be sort of like the modern equivalent to having black coffee or having coffee with just cream but no sugar added.

The History of Chocolate

If you are interested in learning more about the history of chocolate and hot chocolate as a beverage, these articles has some interesting information about how chocolate was used in previous centuries dating back hundreds of years:

Notes About the Hot Chocolate Ingredients

Several 19th century recipes I have seen call for making the chocolate with milk or cream. I prefer mine with just water, but you can certainly add a couple of spoonfuls of either milk or cream to your hot chocolate. Some old recipes even call for equal parts of water and milk, so the ratio is really up to your personal preference.

The most commonly used sweetener for hot chocolate in the 19th century would have been cane sugar, but you can substitute any sweeteners that you like and have on hand. The spice is optional, too. Nutmeg is the most commonly mentioned spice in 19th century recipes, but you could try other spices like cinnamon, too, or omit the spice altogether.

To make this recipe, I combined elements from two different 19th century recipes. The first is from The American Frugal Housewife by Lydia Maria Child published in 1833.

“Many people boil chocolate in a coffee-pot; but I think it is better to boil it in a skillet, or something open. A piece of chocolate about as big as a dollar is the usual quantity for a quart of water; but some put in more, and some less. When it boils, pour in as much milk as you like and let them boil together three or four minutes. It is much richer with the milk boiled in it. Put the sugar in either before or after, as you please. Nutmeg improves it. The chocolate should be scraped fine before it is put into the water.”

And the second recipe I used was from Miss Beecher’s Domestic Receipt-Book from 1858.

“Allow three large spoonfuls of scraped chocolate to each pint of water, or take off an inch of the cake for each quart of water, boil it half and hour, and do not boil the milk in it, but add it when wanted.”

It’s interesting to see the differences between the two recipes. One calls for boiling just a few minutes and the other one calls for boiling it for half an hour. One recipe says it’s better to add the milk with the water when it is boiling and the other one says to add the milk after. And one recipe mentioned both sugar and nutmeg while the other one doesn’t mention either. Since the second recipe is from later on in 1858, it’s possible that the chocolate being used at that point might have had some sugar mixed with it, or it’s also possible that the recipe simply assumes that people would add sugar to taste later on since it’s typically for 19th century recipes to omit details like that.

I combined both of these recipes to make a hot chocolate that would combine elements of both. I omitted the part about scraping the chocolate fine because modern chocolate has a smoother texture and melts very quickly in boiling water. And I decided that 3 minutes would be enough time for the chocolate to boil in the water. (I didn’t want to wait half an hour for my hot chocolate!) And I added both sugar and nutmeg like the first recipe suggests.

It was also popular for hot chocolate to be served with a froth of foam on top, so people would often stir their chocolate with a special tool to blend it well and they would pour it back and forth from a height to create the air bubbles to make a froth on top. I omitted this step, but you could certainly try that if you like.

You can enjoy this hot chocolate with your favorite breakfast or dessert recipes, or you can try it with some old-fashioned 19th century gingerbread cookies for a historic-tasting treat.

This recipe is very customizable. You can add more or less sugar depending on how sweet you want your hot chocolate and even though they might not be as authentic to the 19th century, you can use other sweeteners besides sugar too if you like.

I like to use my french press for frothing milk/light cream. Adding a bit of sugar and nutmeg both in the froth and the hot chocolate is probably what I'll try today. Thanks for the recipe. What a great project and service you are doing.

That sounds like a great way to achieve the froth and a great idea for making hot chocolate. Thanks for sharing!

Thank you, very interesting. I love old cookbooks. Will give this a try when my granddaughter visits next week. Happy Holidays!

Old cookbooks are so fun! Happy holidays to you too!