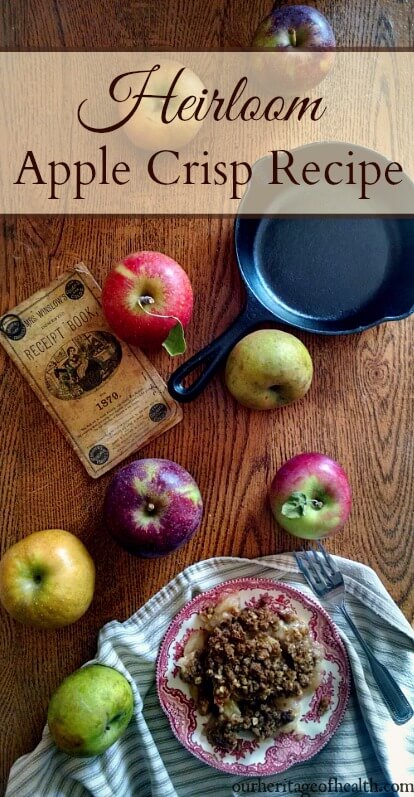 One of my favorite things to make each fall is apple crisp, and this year I was especially excited to make an heirloom apple crisp to celebrate the autumn season.

I’ve decided to call this recipe an heirloom apple crisp recipe for a couple of reasons. First, because it’s a recipe that my grandmother, mother, and I have all used, so it’s an heirloom in the sense of being a recipe that has been in my family for a couple of generations now. The original recipe comes from my grandmother’s old Better Crocker Cookbook from the 1970s, and I adapted it a bit to suit my own taste and preferences. And the second reason is because this year I used all heirloom varieties of apples in my crisp.

Apple crisp is a delicious fall dessert no matter what type of apples you use, and you can certainly make this recipe with any of the usual apple varieties you normally find at Pick-Your-Own apple orchards, farm stands, or at grocery stores.

If you’re able to find them, though, I think that using some unique heirloom apple varieties adds a depth of flavor to the recipe, not to mention the fact that it’s a lot of fun to try some of the more rare and obscure varieties that aren’t just the same couple of varieties you see everywhere this time of year.

There are hundreds of different apple varieties (and there used to be even more varieties in previous centuries, but sadly some of those varieties are extinct now), and some of those antique apple varieties have amazingly complex flavors that make them perfect for eating out of hand or baking with them. And if you’re a history lover like I am, it’s really neat to be able to taste some of the nearly forgotten varieties that were popular a couple of hundred years ago.

Whether or not you have access to heirloom apple varieties where you live, though, I think one of the keys to having a really good flavor in your apple crisp is to use a couple of different varieties of apples. This will give your crisp a nice balance of tart, sweet, spicy, etc. rather than the one-dimensional flavor you get from just using one type of apple.

It’s also usually a good idea to use firmer apples rather than softer apples if you like your apples to keep their shape when baking and to have a firmer texture rather than turning to mush once they go in the oven. A few heirloom varieties that are great for baking with are Baldwin, Rhode Island Greening, Roxbury Russet, Newton Pippin, Northern Spy, Gravenstein, and lots more!

I had several early season apples when I was making my crisp, so I used a lot of Gravenstein and Hubbardston Nonesuch apples with a few Ribston Pippins and Esopus Spitzenburgs mixed in. Later on in the season, I want to do some more baking with some of the later season varieties like Baldwin, Roxbury Russet, and Newtown Pippin.

Depending on what apples are available near where you live, it’s fun to play around with using different varieties to see which ones you like the best in your apple crisp.

If your apples are a bit on the milder side, or if you are making this with older apples that have lost some of their brightness, you can add a bit of lemon juice and/or zest to give them a bit more flavor. This was a common 19th century tip for brightening up the flavor of apple dishes.

As an Amazon Associate and member of other affiliate programs, I earn from qualifying purchases.

Hello Lori, I really appreciate you and your site for what you bring forth in a way that tends to carry people out of the manic would and into a time when the only thing they had to worry about was the town down the way or what one friend was gossiping about the other. After a long streach of having to deal with today's world, it is a pleasure to receive an email from you, to be able delve into the piece and forget the world for awhile, the whole while mentally placing yourself into the effort of what life was like during that particular time. To make the baked beans the way it had been done back then, and while preparing the dish the whole time, concentrating on how it was worked during that time, years ago, when times were much less hectic. I appreciate you for giving me a little bit of that, --relaxation / inner calm--. Please, keep being who you are. Thanks John

Thank you very much for your kind words, John! I'm so glad to hear that you've enjoyed it and I appreciate your letting me know :)