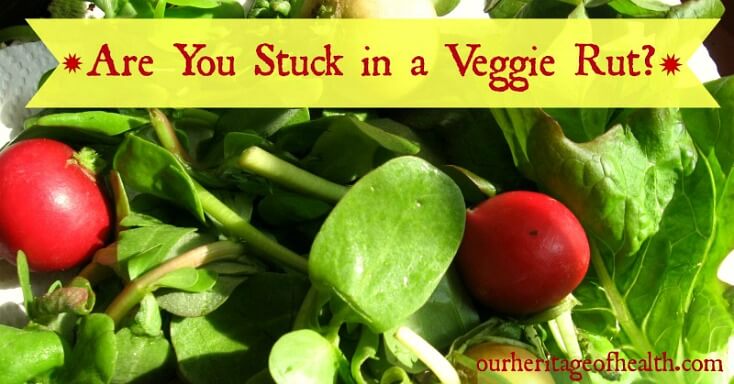 Maybe it’s just me, but I find that’s it’s pretty easy to get stuck in a veggie rut and end up eating the same few veggies over and over again. When I shop at the grocery store, I find myself falling back on the old standbys: carrots, onions, potatoes, lettuce, etc.

There’s nothing wrong with the standard “normal” veggies, of course, but it can get a bit boring to eat the same ones week after week. That’s why I’m making an effort this year to be more adventurous and add more variety to the veggies that I eat.

These are a couple of the things I’m doing to expand my veggie horizons a bit:

I first started planting my own heirloom veggie seeds last year, and I had so much fun with them last year that I’m doing it again. Even though I still grew some of the usual veggies like peas and beans, I was able to grow different varieties that I would never be able to find in a regular grocery store.

Some of the fun veggies I grew last year that I’m growing again this year were Blue Podded peas (with bluish-purple pods and green peas inside), Cherokee Trail of Tears beans (the seeds inside mature into shiny black beans that can be shelled for soup beans) and Scarlet Runner beans (a colonial era bean with bright red flowers and magenta-colored seeds inside).

I also grew a couple of different lettuce varieties, including Miner’s Lettuce which 19th century miner’s ate during the Gold Rush to prevent scurvy. That’s definitely not a salad green I could find at the grocery store!

I recently found a local organic farm that’s only about a 20 minute drive from where I live (Hutchins Farm in Concord for those of you who live in Eastern, MA). I’ve been loving being able to get freshly picked seasonal produce from them, and, because they only sells what they grow themselves during each season, I’ve been branching out from my usual veggie favorites to try some new varieties that weren’t very familiar to me.

Just this past week, I tried purslane (pictured above) for the first time. It’s a beautiful little salad green with crisp, crunchy leaves, but I had never even heard of it before this year. It’s one of my new favorites now, though. I’ve also been able to try a wide variety of head lettuces that have much more flavor and color than the boring heads of romaine lettuce I used to get week after week from the grocery store. I have nothing against romaine, but it’s been so nice to try new varieties rather than eating the same exact type of lettuce every single week!

I also tried radishes for the first time this year. Even though you can usually find those at a regular grocery store, I had never bothered to try them before because they always just got lost among the sea of produce on the shelves. When I saw the brightly-colored, fresh-picked radishes at the farm stand, though, I just had to try them, and now I’ve added another veggie to my list of favorites.

Another seasonal veggie I’ve really been enjoying this spring is asparagus. From the couple of times I had eaten not-very-fresh, overcooked asparagus before at restaurants and other places, I had gotten the idea in my head that I didn’t like asparagus, but at the beginning of the growing season when the only veggies available at the farmstand where lettuce, spinach, and asparagus, I decided to try some. And now I love it!

Joining a CSA (Community Supported Agriculture) is something I haven’t tried quite yet but that I would really like to try. I found a good CSA program this spring that has deliveries close to where I live . . . but I didn’t find out about it until after the deadline for signing up, so I missed the boat this time around. I’m definitely keeping it in mind for next summer, though!

With a CSA program you pay one fee at the beginning of the season and then receive a share of produce each week for however long the season lasts. CSA shares are a great way to get lots of variety in the veggies you eat, and the really fun part is that it’s like getting a surprise package every week. 🙂

Joining a CSA is a great way to support local farms and to force yourself to branch out and try some new veggies that you might not have ever tried otherwise.

I’m having so much fun trying new varieties of veggies, learning more about them, and experimenting with new recipes. I wish I had broken out of my veggie rut a long time ago! 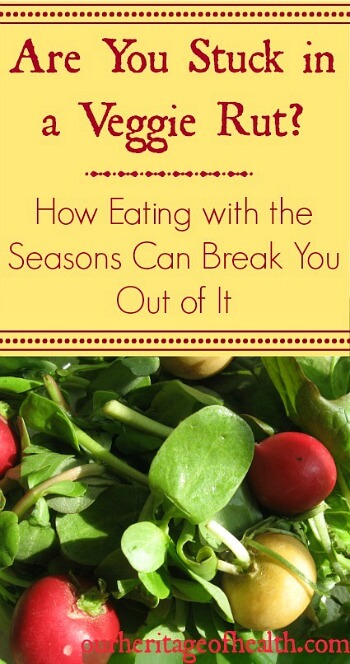 This post is shared with: Natural Living Link-Up at Jill’s Home Remedies.

You can certainly get in a veggie rut if you shop exclusively at the grocery store! We're in our third summer of a CSA (fourth summer shopping at farmers markets) and just love it. However, my husband has decided that we can save the $550/season and is digging up our back yard - we have a total of 7 raised beds so far, plus 2 flat beds for perennials, where he's planted a dizzying array of vegetables that he sprouted from heritage seeds. I'm rather in awe, to be honest.

BTW, purslane grows wild in our yard; he's also taken the lawn organic so we can harvest not only the purslane but dandelions, as well.

Oooh, your backyard garden sounds amazing! And there's nothing like the fun of just stepping out your back door to get freshly-grown produce :)

I also just learned about CSAs! I joined at the last minute, but was told that there was still time. Maybe you can reach out to your CSA in case someone backed down, or they have extra produce and can use the extra income? I would ask even in the middle of a season, because the worst that can happen is that they'll say no. Good luck! : )

I am picking up my second CSA share tomorrow, and I am also excited to see what is in store. My question is this: how do I keep produce (like lettuce varieties) as fresh as possible before being consumed and before going bad enough to be thrown away?

Good idea - I hadn't thought about the fact that somebody might have backed out of their CSA share. I found out that the one near me does a fall share later in the season too, so I could always do that too :)

I know, it's always so hard keeping lettuce and greens fresh, isn't it? I came across this idea a few weeks ago and I've been storing my greens this way since then: They still get wilty, but not nearly as quickly :)