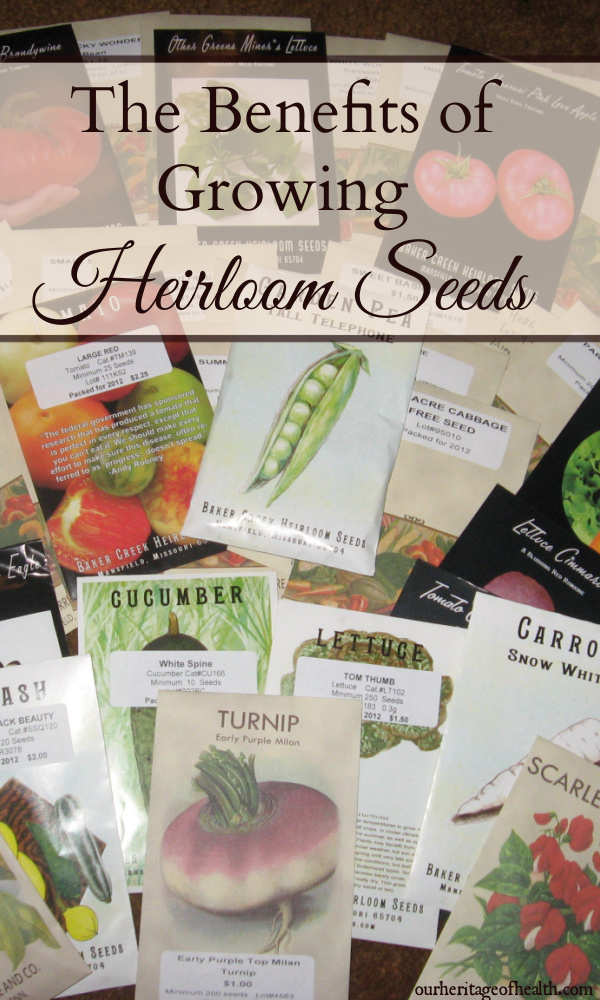 Now that spring is here, I’m getting ready to get my little vegetable and herb garden going again. In the past I’ve always bought ready-to-plant seedlings from my local garden center, but this year, I’m trying something a bit different – I’m planting my garden entirely from heirloom vegetable and herb seeds.

It wasn’t until fairly recently that I discovered how many varieties of heirloom seeds there are, and being someone who is obsessed with all things old-fashioned, I was pretty excited about the idea that I could grow the same varieties of vegetables that people grew 100, 150, or even 200 years ago!

Heirloom seeds aren’t just for history lovers, though. They’re great for anyone who wants to grow beautiful, delicious vegetables in their backyard. (Update 2022: Since writing this post several years ago, I’ve been growing almost exclusively heirloom varieties in my garden. The vast majority of my garden consists of heirloom varieties from the 19th century or earlier. I have nothing against hybrid seeds per se, and I know that there are many good things about them and that many people enjoy growing them, but I have to admit that I am completely biased towards the heirloom seeds!)

What Exactly Are Heirloom Seeds?

If you ask different people you might get slightly different definitions of what exactly fits into the category of an heirloom seed. And people don’t always agree on how old is old enough for a seed to be considered an heirloom.

The most important part, though, is that heirloom seeds are open-pollinated. That means that you can save the seeds from heirloom varieties throughout the years, and many heirlooms have passed down from generation to generation for decades and even for centuries in some cases. Hybrid seeds, on the other hand, are not open-pollinated, and if you try to save seeds from them you really have no idea what you’ll end up getting when you try to plant them next year.

One of the main reasons why a lot of people love growing heirloom varieties of vegetables is their incredible flavor. Many modern hybrid vegetables were developed to be really tough varieties that can withstand long shipping distances across the country. Heirloom varieties, on the other hand, often come from a time when vegetables were grown more locally so the focus could be on flavor rather than on durability for transport.

There are definitely still some good tasting hybrid varieties out there, especially some of the newer ones. (I have to admit that even with my love of heirlooms I’ll make an exception for the incredible flavor of a Sungold hybrid tomato.) On the whole, though, I think that most heirlooms win the prize when it comes to flavor.

2) Heirloom Varieties May Be More Nutritious

Many modern hybrids are bred for very high yields, but these higher yields sometimes come at the sacrifice of the nutritional value of the plants. Studies have shown that several modern plants have lower levels of nutrients than the same types of plants did in past decades, especially for large industrial farming methods that often deplete the minerals in the soil.

I wouldn’t go so far as to make a blanket statement that all hybrid varieties are less nutritious than heirloom varieties, but I also wouldn’t be surprised if many of them are either. I’m not an expert on plant breeding, but it certainly seems like breeding plants for higher and higher yields could have an effect on the nutritional content of the plant.

3) You Can Save Heirloom Seeds to Plant Next Year

Open pollinated heirloom seeds can be saved for planting again next year. Unlike seeds from hybrid plants, which you would need to keep buying each year, you can save the seeds from your heirloom vegetables for the next season. So, you could essentially only have to buy a seed packet one time and keep growing heirloom vegetables in your garden year after year!

This is a great way to save some money on your garden because you don’t have the extra expense of continually buying seeds every year. You also have complete control over the way that your seeds are grown and processed because you are doing everything right in your own backyard!

4) You Can Preserve a Part of History

When you grow heirloom seeds, you are literally helping to keep a part of history alive by growing it in your garden. As I’ve done more research into heirloom seed varieties, I’ve discovered that there are many, many heirloom varieties that have gone extinct over the years. It’s sad to think that because those varieties no longer exist, we will never be able to know what those lost varieties looked like or tasted like.

When you plant heirloom seeds in your garden, though, you can help to preserve these old varieties for future generations so that they don’t disappear forever like some of the extinct varieties already have.

5) You Can Have Fun Trying “New” Unusual Varieties!

There are so many different varieties of heirloom vegetables that we rarely see in the typical grocery store today – things like yellow tomatoes, white carrots, blue-podded peas, and even purple beans.

And the fun part about getting these heirloom seeds is that you can learn about the history behind the different seed varieties and how old they are. I’m really looking forward to growing Scarlet Runner beans (mentioned as early as 1750), the Connecticut Field Pumpkin (a Native American heirloom since the time of the first New England settlers), and the Large Red tomato (a pre-1830s variety documented to have been grown by the Shakers in Massachusetts) among all of the other amazing varieties of seeds, along with many other types of seeds.

Just about every type of seed I ordered was grown in the 1800s and before, so this summer I hope to taste some truly historic varieties of vegetables!

I ordered my seeds from the  Baker Creek Heirloom Seeds Company and a related company called Comstock, Ferre and Co. There are literally dozens of varieties of seeds from just about every vegetable you can imagine.

These seeds aren’t all certified organic, but they are untreated by pesticides, and all of their seeds are open-pollinated and non-GMO, so you don’t have to worry about anything questionable on your seeds.

I got so excited about all of the different seed varieties that I might have gone a little bit overboard when I was buying them. I probably don’t really have room in my garden for six different varieties of tomatoes . . . but I just couldn’t resist trying them all anyways.

All in all, I got 46 seed packets. (Yes, I realize I’m crazy.) If all goes well with my garden this year (fingers crossed!) I’ll have five different types of beans, three types of corn, three types of carrots, three types of cucumbers, two types of pumpkins, squash, turnips, parsnips, and just about all the herbs I could ever want!

(Update 2022: I had to laugh when I saw how many types of seeds I tried planting back when I first wrote this post. I made one of the classic beginning gardener mistakes and I tried planting far too many types of seeds! Some of them grew successfully, but many of them did not because I was still pretty new to gardening and I was much too ambitious with my seed buying. Since then, I’ve been much more realistic with how many varieties I actually have room for in my garden space – although I still usually end up wanting to plant more than I have room for!)

Heirloom seeds aren’t always easy to find in garden centers, so the best place to find them is usually online. In the years since I first started growing heirloom seeds, I’ve discovered several good places to find heirloom seeds, and I’ve shopped at any different online stores in order to find specific varieties that I was looking for. In one of my other gardening blog posts, I list out several good options for some of the places that I think are the best online sources for heirloom seeds.

This post is linked to Sunday School at Butter Believer.

Are You Stuck in a Veggie Rut? How Eating with the Seasons Can Break You Out of It | Our Heritage of Health

[...] first started planting my own heirloom veggie seeds last year, and I had so much fun with them last year that I’m doing it again. Even though I [...]