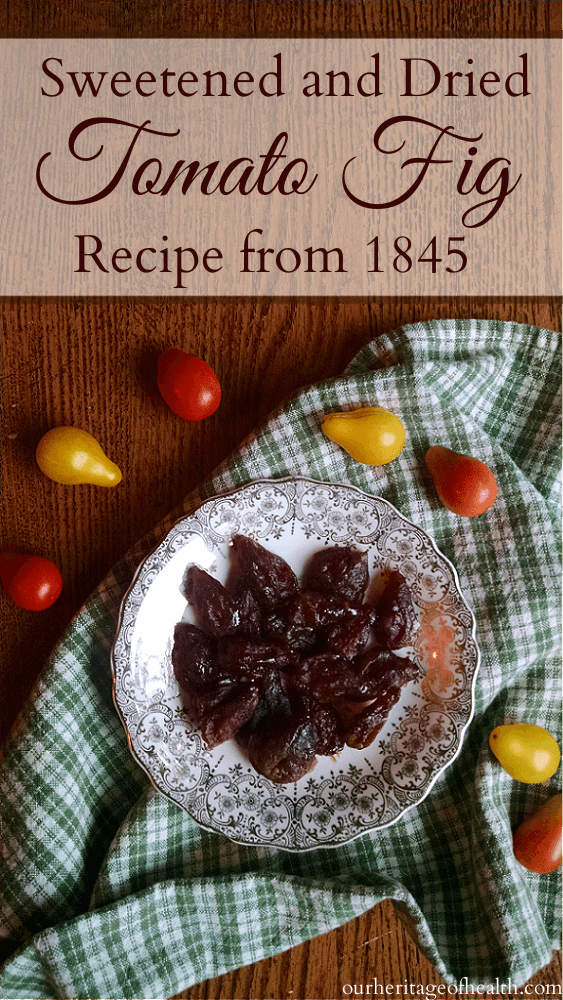 This recipe for sweetened, dried tomato figs is an unusual way to preserve tomatoes that I’ve seen mentioned in several old 19th century cookbooks . Despite the name, there aren’t actually any figs in this recipe at all, but the dried tomatoes do somewhat resemble figs in both appearance and taste.

In the 19th century, as tomatoes were gaining in popularity in America, you start to see more and more recipes (or receipts) using tomatoes in 19th century cookbooks, including recipes for ketchups, sauces, and dried tomato figs. For making tomato figs, small tomatoes are simmered in sugar and then dried fully and coated in more sugar for storage.

I’m not quite sure if the original intention of the tomato figs was to create a more economical way to make a substitute for dried figs (like with using citron melon to make candied citron for holiday fruitcake rather than buying imported citron fruit) or if someone preserved tomatoes this way and then decided that they happened to look and taste reminiscent of dried figs. Either way, though, they really do remind me of figs and they’re certainly an interesting way to preserve an abundance of fresh tomatoes.

You can sometimes find yellow or red pear tomato seedlings at garden centers or farm stands, and you can find seeds online too. But if you don’t have pear-shaped tomatoes you could use any small cherry tomato variety. They might not look as much like figs, but the flavor should be pretty similar.

These are some of the small pear-shaped tomatoes I grew in my garden this summer:

The recipe I’m using comes from The New England Economical Housekeeper from 1845. This is the description of the original recipe:

“Take six pounds of sugar to one peck (or sixteen pounds) of the fruit. Scald and remove the skin of the fruit in the usual way. Cook them over a fire, their own juice being sufficient without the addition of water, until the sugar penetrates and they are clarified. They are then taken out, spread on dishes, flattened, and dried in the sun. A small quantity of the sirup  should be occasionally sprinkled over them whilst drying; after which, pack them down in boxes, treating each layer with powdered sugar. The sirup is afterwards concentrated and bottled for use. They keep well from year to year, and retain surprisingly their flavor, which is nearly that of the best quality of fresh figs. The pear-shaped or single tomatoes answer the purpose best. Ordinary brown sugar may be used, a large portion of which is retained in sirup.” ~ The New England Economical Housekeeper, page 66

I used much smaller amount of tomatoes than what the original recipe calls for because sixteen pounds of tomatoes would make quite a lot! I decided to use brown sugar like the recipe mentions, but I dried mine in the oven rather than drying them out in the sun because I didn’t want to have to worry about ants crawling on them and flies landing on them, etc. because all of the sugary syrup seems like it would be a bug magnet. It was also cloudy on the days I was making my tomato figs, so using the oven was more convenient than waiting for the sun to come back again.

If you have a dehydrator, you could certainly use that to try them, or if you just have an oven, you could put it on the lowest setting possible and leave the door propped open. Since the oven that I used doesn’t go any lower than 170 degrees, what I did was to turn the oven on and then shut it off when the temperature reached about 110 degrees and then put my tray of tomato figs in to dry. And then when the oven cooled down again, I turned it on again to 110 degrees and shut if off, and kept repeating the process until they were fully dry.

I didn't include any specifics for the amount of time it takes to dry the tomatoes because it really depends on several different factors like the method you use to dry them (oven, dehydrator, sun) and the temperature and humidity levels, etc. I dried mine over a couple of days because I turned the oven off and on when it was convenient (shutting if off overnight and when I was leaving the house, etc.) so it wasn't one continuous amount of time that I was drying them for.