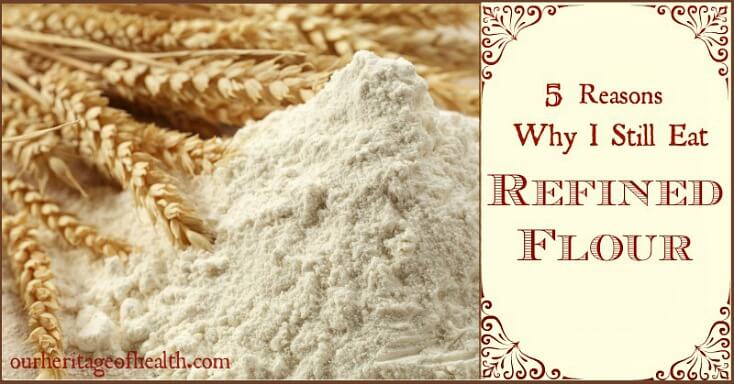 As funny as it may seem, when you stop to think about it, the subject of flour can actually be a very controversial one among the natural health community. And that’s assuming that you even eat flour and grains to begin with (which would be a topic for a whole other post . . .)

I’ve been on both sides of the flour-eating spectrum. Growing up, all we ever had in our house was the average all-purpose white flour. That’s what my mom baked with, and that’s what I learned to bake with too. Whole wheat flour was for the “weird” people who did crazy things like buy organic food and use natural products.

Once I actually became one of those “weird” people myself, though, I switched completely from using white flour to using only whole wheat flour. And it had to be 100% whole wheat or I didn’t even want to eat it because I felt like it wasn’t healthy enough.

I tend to do things in extremes (which I realize isn’t exactly the ideal way to be doing things), but I think I’ve finally found a good balance between completely avoiding whole wheat flour and completely avoiding white or refined flour.  I’ve been adding more refined flour into my diet, and I now believe it’s actually healthier for me to be doing so.

Here are the five reasons why I still choose to eat refined flour:

When you look back throughout history, it’s actually not true that our ancestors ate only whole grains and whole wheat. The reality is that a good portion of the flour that was consumed by earlier generations was refined to some degree.

Even though the wealthy could afford to buy flour that was more refined than the coarser flours of the poor, many lower and middle class people would still refine their flour by sifting it, especially for special occasions and holidays. It has always been fashionable to try to emulate the wealthy, and refining flour was no exception to this.

The topic of which type of flour is the most traditional could be a post in and of itself, but it basically boils down to the fact that the type of flour used varied depending on how wealthy or poor a person was, what sort of food they were baking (a loaf of bread vs. a cake), the occasion they were baking for (a wedding or holiday vs. everyday fare), etc.

Most of the time, in early America at least, the flour was usually somewhere in the middle between what we normally think of as white flour and whole wheat flour today. It was made from heirloom varieties of wheat, and it was often mixed with other grains such as barley, rye, and cornmeal when being used for everyday bread baking.

The bran of whole grain flours contains enzyme inhibiters such as phytic acid. These enzyme inhibiters are anti-nutrients that make it harder for us to absorb vitamins and minerals from the foods that we eat. Anti-nutrients such as phytic acid can bind to important minerals such as calcium and magnesium and keep them from being absorbed by our bodies, potentially leading to deficiencies of these minerals.

When the bran of the grain is removed during the refining process, though, the majority of these anti-nutrients are removed along with it. So, even though refined flour doesn’t have all of the vitamins and minerals that are present in the bran of the grain, because the anti-nutrients have been removed, it doesn’t hinder us from absorbing the nutrients in the other foods we eat either.

While whole grain flours should really be either soaked in an acidic medium (like apple cider vinegar or buttermilk), sprouted, or soured (like with traditional sourdough) to neutralize the anti-nutrients, refined flour doesn’t require any of these special preparation methods because the anti-nutrients such as phytic acid have been removed along with the bran.

And sometimes I’m just not patient enough to wait! Using refined or partially refined flours is perfect for these scenarios because I can make a batch of biscuits just in time for supper even if I forgot to feed my sourdough starter (again).

When I first started using whole grain flour instead of refined flour, I was so worried about making sure that every single thing I ever baked was made with 100% whole wheat flour that had been properly soaked or leavened with a sourdough starter. The problem is, of course, that I don’t always eat in my own home.

When I go to a restaurant, or if I’m at a friend’s house, or a church supper, or any other situation where I’m eating food that I haven’t cooked myself, worrying about only eating whole grain baked goods will do a lot more harm than good, especially since stress can contribute to a lot of health issues. I realize now that it’s a lot worse for my health for me to be stressing over every single bite that I eat than it is for me to just have some white flour once in a while!

For those with an allergy or a sensitivity to wheat or gluten, eating refined flour isn’t an option, I realize, but unless that’s the case, it’s really better to just relax and try to enjoy what you’re eating, even it isn’t “perfect” in terms of nutrition.

Refined flour is villified a lot these days. In the case of some types of white flour, this may be valid. Flour that has been bleached, bromated, or enriched with synthetic vitamins is not a healthy choice of flour. Plain, un-bleached, un-bromated, un-enriched flour, though, isn’t really bad. It’s just an empty food.

The way I viewed refined flour changed after I read  The Nourished Metabolism. From reading this book, I realized that refined flour, like white rice or potatoes, is mainly a source of energy. It’s lacking all of the vitamins and minerals that you would find in properly prepared whole grain flour, but as long as you are getting those vitamins and minerals from other sources in your diet, it’s not really going to do any harm to have some refined flour once in a while.

Eating only refined flour baked goods for every meal of every day probably isn’t the best idea, and eating that way over the long term could eventually lead to nutritional deficiencies, but having a dinner roll made from white flour isn’t the end of the world either!

All Refined Flour Is NOT Equal

The refined flour that was used by those living in past centuries is actually quite different from the refined all-purpose flour that we typically see on grocery store shelves today.

To start with, the modern hard red winter wheat that is used for virtually all refined flour products today has been hybridized for higher yield and higher gluten content. Old-fashioned heirloom varieties of wheat such as einkorn, spelt, red fife, etc. were the varieties of wheat eaten by our ancestors.

The refined flour of past centuries was also much less processed than most refined flour today. Before the 20th century, flour was simply ground at the mill, and then bolted or sifted to remove the majority of the bran while still leaving the germ intact. Modern refined flour, on the other hand, is usually refined to the extent that all of the bran and germ of the flour has been removed. Modern flour is also often bleached and “enriched” with the addition of synthetic vitamins, which often aren’t very well absorbed and assimilated by the body.

When I use refined flour, I typically grind a combination of spelt and barley in my grain grinder, and then sift the flour to remove the majority of the bran. This gives me a compromise somewhere in between whole wheat flour and refined white flour. This is what I usually use for making bread and other baked goods.

for baked goods, and I’ve really been enjoying it. I like its flavor, and I love how convenient it is for days when I don’t feel like using my grain grinder but still want heirloom, refined flour. 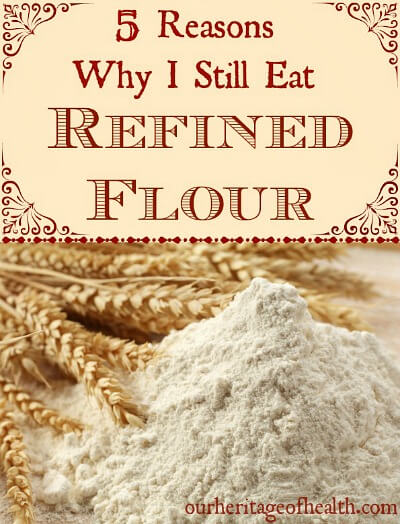 Why I Buy Sprouted Wheat Flour

Homemade Bread: Why It Should Be the Only Kind You Eat

31 thoughts on “5 Reasons Why I Still Eat Refined Flour”