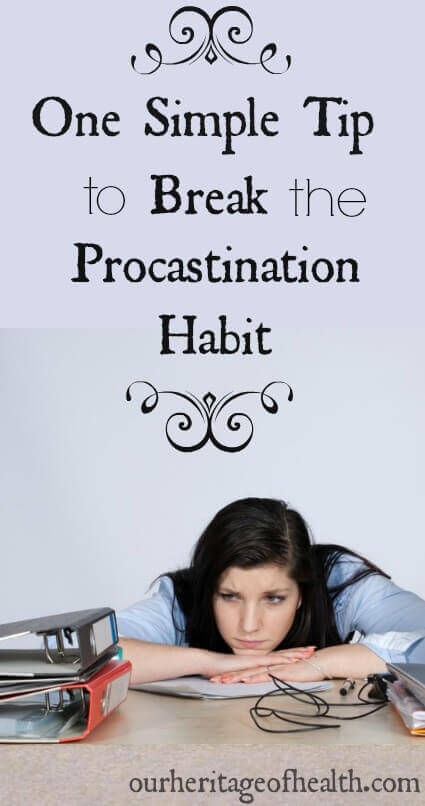 Since there are still plenty of tasks that I need to do whether or not I really want to or feel ready to do them, I needed to find a way to help myself to accomplish the things I needed to. And since procrastinating can often make me feel more stressed since I know I have all of these uncompleted tasks looming on my to-do list, I wanted to find a way to help to reduce that source of stress as much as possible and break the procrastination habit.

My number one tip for helping to break the procrastination habit is a very simple one. It’s not an instant cure, and I definitely still find myself procrastinating at times, but this is the one thing that’s really been helping me get more things done and to cross more tasks off of my to-do list.

My simple tip is the Ten Minute Rule.

The Ten Minute Rule means that I have to set my timer and spend a full ten minutes on whatever task I’ve been procrastinating doing. And that’s it. It seems almost too easy to be true, but it really has helped me many times with getting more things done.

With this strategy, I don’t have to actually finish the task, and I don’t even have to accomplish a specific part of the task. I just have to work on some aspect of it for ten minutes.

The Ten Minute Rule has been helping me in a couple of different ways:

1) It Reduces the Feeling of Overwhelm

When I have a task on my to-do list that I’m not looking forward to, especially if it’s a difficult or time-consuming task, it can make me feel overwhelmed. With the Ten-Minute Rule, though, I know that I only have to spend ten minutes working on the task, and since ten minutes is such a short amount of time, it seems a lot more manageable.

2) It Helps with My Perfectionist Tendencies

In addition to being a procrastinator, I’m also a perfectionist. These two tendencies really go together because a lot of times I procrastinate because I feel like I won’t be able to do a good enough job at the task, so I’ll put it off until a time when I think I’ll be able to do it better.

3) It Helps Me to Accomplish Something at Least

I always feel better when I can check something off of my to-do list. Sometimes I even write down tasks I’ve already completed just so I can have the satisfaction of checking them off.

Using the Ten-Minute Rule allows me to at least get something done of the task I need to do, even if it’s only a small part of it. Something is better than nothing, and it makes me feel less stressed if I know that I’ve at least started the task. And nine times out of ten, once I actually start working on something for ten minutes, I usually get involved with what I’m doing and I get motivated to work on it for longer, or sometimes even to finish the entire task.

Yes...this sounds like me...and my boyfriend. I'm going to try this tip. I'm hoping that he'll see it working for me and try it himself. I'll be positive and buy 2 timers. So glad I saw this pin. Thank you. I really do believe it will help me.

Positivity always helps! I hope this works well for both of you! :)

[…] Related post: One Simple Tip to Break the Procrastination Habit – Our Heritage of Health […]

I never linked procrastination and perfection together yet they both describe me to a tee ! None of my friends understand this, but they don't have either of these attributes. I will give this a try and maybe get the book also.

Yes, it's so interesting to see the link between the two! I can't imagine not being either a procrastinator or a perfectionist because I've been both for about as long as I can remember. I hope this method helps you and that you enjoy the book if you decide to read it. It's a great resource for helping with not just perfectionism but also all of the aspects of what the author calls "wholehearted living."

I still get nothing accomplished which makes me feel guilty and sad. Setting a timer only makes me feel like a failure. I was hoping for something inspirational.

I'm sorry the timer method didn't work for you and that you're still not getting the things accomplished that you want to. Setting a timer is a method that works well for me, but everyone is different and what works for me might not work for everyone. Maybe instead of using a timer, you can do some exploring into the root causes for why it is that you procrastinate and why you feel guilty and like a failure when you don't accomplish what you wanted to. Getting curious about what emotions you're feeling before and after you find yourself procrastinating might give you some clues to help you figure out why you've developed that pattern (and also how to help yourself to reverse that pattern.) I hope you can find a method that will work well for you!