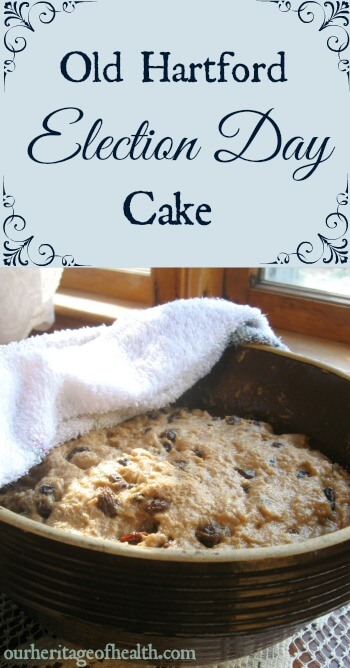 One old-fashioned tradition that I think should make a comeback in our modern day is the tradition of making a big fancy cake on Election Day. It seems a bit strange today to think of celebrating Election Day by baking a huge Election cake, but that exactly what many people did in previous centuries.

When looking through my old cookbooks and recipe pamphlets, I used to pass right by the recipes for Election Cake. Even though the cake sounded delicious, I had no idea how I could try a recipe that calls for several gills of yeast. (A gill is about a half a cup.) That would be about a million of those little packets of store bought yeast!

It was only in the past couple of weeks, though, that I realized that I could use a homemade sourdough starter as the yeast in historic recipes like this. Now that I finally have a source of homemade yeast, I just had to try making Election Cake, and it worked out perfectly that I made this yeast discovery just in time to make a cake for Election Day in November!

(And if you’ve never tried making homemade yeast before and would like to give it a try, this is the method I used to make my homemade sourdough yeast.)

Election Day might seem like an odd day to celebrate with a special cake, but back in Colonial Times, Election day was a much bigger deal, especially for those in the New England colonies who were heavily influenced by Puritanism. Many holidays that are often celebrated today, like Christmas, weren’t considered by the Puritans to be appropriate to celebrate, but Election Day was a chance for colonists to enjoy the festivities of a holiday.

The Election Cake, like the cakes served at weddings and other special occasions, called for ingredients like sugar, spices, and dried or candied fruits that were often more expensive or took more work to prepare. (There were no seedless raisins back then, so if you wanted raisins in your cake someone had to remove all of the seeds by hand!)

The Election Cake is related to the Muster Cakes or Training Cakes the colonists made on days when men in the militia would gather together for military practice. The ingredients in Election Cake are also very similar to those used in many traditional Christmas fruitcake recipes, so the Puritan colonists got to enjoy their “Christmas” cake after all by having it on a different holiday.

To keep this post from getting any longer, I’ll stop there and post links to some of the history I found online for those who are interested in learning more:

The Election Cake recipe I decided to try comes from Miss Beecher’s Domestic Receipt Book, a cookbook published in 1850. Though I’ve found Election Cake recipes in some of my own old, antique cookbooks, the recipe in this cookbook from the database of the Historical American Cookbook Project includes some spice with it. The recipes in my books are for a plainer cake, so I liked the idea of adding some spice. (And, if I haven’t already mentioned it before, this database is an amazing free resource for anyone interested in historic recipes!)

According to Miss Beecher’s book, this recipe was supposed to be 100 years old as of the writing of the cookbook in 1850 which would date it to around 1750 – if Miss Beecher’s sources were correct, that is. The recipe could have been passed down by word-of-mouth or altered a bit, though, by the time it was printed in 1850.

Historic Version of the Recipe:

This is the version of the recipe printed on page 146 of the book in the section labeled “Rich Cakes.”

“Rub the butter very fine into the flour, add half the sugar, then the yeast, then half the milk, hot in winter, and blood warm in summer, then the eggs well beaten, the wine, and the remainder of the milk. Beat it well, and let it stand to rise all night. Beat it well in the morning, adding the brandy, the sugar, and the spice. Let it rise three or fours hours, till very light. When you put the wood into the oven, put the cake in buttered pans, and put in the fruit as directed previously. If you wish it richer, add a pound of citron.”

Modern Adaptation of the Recipe:

Since I didn’t need enough cake to feed an entire town, I shortened the recipe to make a more reasonable amount. I also replaced the wine and brandy in the recipe with lemon juice. I’ve seen that substitution in other 19th century cookbooks, and it gives a nice flavor to the cake without disrupting the texture or flavor. You could certainly use wine and brandy, though, if you like. I also omitted the citron this time since I don’t have any in the house at the moment. I’m sure it would be delicious with it, though!

I used a sourdough starter for the yeast in this recipe, following the method I described in my last post. If you don’t have a sourdough starter, though, or it your starter has died, you can still make this cake with modern-day baker’s yeast. You would need to shorten the rising time, and you would lose some of the health benefits of the sourdough, but a packet or two of active dry yeast would work in a pinch. Some of the links I posted above in the history section above include recipes with modern baker’s yeast.

This is my version of the old recipe:

Note: This recipe calls for adding milk and raw eggs to the dough and then letting it rise overnight. I followed the original historic recipe in this regard to keep it as authentic as possible, but current food safety practices warn against leaving foods such as milk and eggs out at room temperature for a longer period like that. The cake is being baked at high heat afterwards, but just to be on the safe side I would recommend using your own discretion when deciding whether or not you want to follow this method. Alternatively, you could mix up the dough and let it rise in the fridge, but it will probably need to rise for longer because the cold temperatures of the fridge slow down the yeast activity.

* I used whole wheat flour for this recipe since I knew that the whole grains would be properly prepared with the sourdough process. For a fluffier texture, though, you could add in a bit of unbleached, unenriched all-purpose flour to make it a bit lighter (although the texture turned out pretty good with the whole wheat flour too!)

I used powdered whole cane sugar to make a bit of icing to drizzle over my cake. Many old-fashioned recipes call for icings with “pounded loaf sugar” so I made my own version of this by putting the whole cane sugar in the blender (a food processor would work too, I’m sure) and just blending it for a minute or two. It turned it into a surprisingly fine powder. For a more convenient modern adaptation, you could certainly use store bought powdered confectioner’s sugar too.

A Taste of History

This Election cake reminds me of a cross between traditional Christmas fruitcake and raisin bread. The texture is denser than a modern cake, but lighter than a loaf of regular sourdough bread. It is only mildly sweet, unlike most sugar-laden cakes today, but the fruit and the icing provide just the right balance of sweetness.

Eating a slice of this cake feels like a true taste of history. Since this was my first time making an Election cake and my first experiment with using sourdough for anything but a loaf of bread, I wasn’t sure how it was going to turn out, but I now have a fun and historic tradition to celebrate Election Day.

Thank you so much for sharing this recipe with us! I intend to make it Sunday and taking it to work on Tuesday as I have to work on Monday. Do you think the cake will keep that long?

Hi Erica, Yes, it should keep fine from Sunday to Tuesday. That's a fun idea to bring it to work on Election Day! :)

How to Make Homemade Yeast | Our Heritage of Health

[...] old recipes now that call for cups of homemade yeast. I’ve even branched out now and tried making a cake with my sourdough starter (and it was absolutely delicious! [...]

Hi Lori! New fan her by way of Little Homestead on the Hill. They are linked up with my Clever Chicks Blog Hop this week and I found you on their link party!

I live in and grew up in Connecticut, minutes from Hartford and never knew about Election Cakes! I appreciate the thorough research and historical background you provided in this post; I know how time consuming it is. I would LOVE for you to share this post with us at my Clever Chicks Blog Hop this week if you can make it! http://www.the-chicken-chick.com/2012/11/clever-chicks-blog-hop-7-country-craft.html

I hope to see you there!Cheers!Kathy Shea MorminoThe Chicken Chick

Hi Kathy! I'm glad you stopped by! Thanks for letting me know about your blog hop - I'm on my way over there right now :)

I really enjoyed reading this recipe. :) Loved that you put the historic version in!