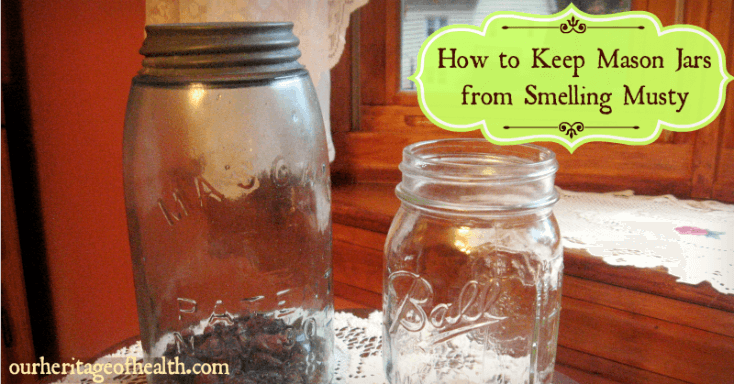 Have you ever taken an empty Mason jar out of the cupboard to use and then smelled that awful musty smell when you opened it up?

Definitely not a pleasant smell when you’re planning to use that jar to store food.

And the longer your Mason jars have been sitting around un-used, the mustier they seem to smell.

I usually don’t have too much of a problem with my smaller jars developing a musty smell because I’m always using them for something, whether it’s storing chicken broth in my half-pint jars in the freezer or homemade jam in my cute little 4 oz jelly jars. The larger jars are the ones that usually tend to get a bit musty for me.

Thankfully, there are ways to prevent the nasty musty smell, though, and to fix jars that already have it.

3 Ways to Avoid the Musty Smell

1) Don’t Screw the Lids on Too Tightly

When the lids of your Mason jars are tightly screwed on, the jars tend to develop that musty smell pretty easily because they are closed off to the air. While the best way to avoid this is probably just to store the jars and the lids separately, the loose lids and bands are really easy to lose track of, and then when you want to use one of the jars, you end up searching all over the kitchen to find where you put the lids. For a compromise, just screw on the lids very lightly so air can still circulate inside the glass jars and so you’ll always  be able to find a lid when you need one.

Another easy way to keep your jars smelling fresh is to rotate them once in a while. So, if you have them all lined up in a cupboard or pantry, just move the ones in the back of the row up to the front every so often. That way, you won’t find yourself always using the jars in the front row while the ones in the back end up just sitting there in the same spot for months on end.

This hint comes from Mrs. Winslow’s Domestic Receipt Book for 1879. According to the section of “Sundry Useful Receipts” adding salt is a way to ward off that icky musty smell:

“Musty bottles or jars may be sweetened with lye or dissolved soda. Let either remain in them a short time, then dry and scald them. They will not become musty if a little salt be kept in them.” (Pg. 26)

I’m no scientist, so I’m not exactly sure why adding salt would work to keep jars smelling fresh and clean, but throwing a dash of salt in the jar is certainly an easy enough thing to do, and, so far, it seems to be working pretty well for me.

For a little experiment, I took two clean Mason jars and put salt in one and left the other one empty. Then I screwed the lids on tightly and left the jars in the cupboard for about a month. When I opened them both up again, they both had a bit of a musty smell (because I had screwed the lids on so tightly), but I could definitely tell the difference between the jar with the salt and the jar without.

If you end up with a jar that already has that tell-tale musty odor, it’s pretty easy to get rid of it and get that jar back to smelling normal again.

Mrs. Winslow’s advice works in this case too.

1) Simply put some warm water in the jar and stir in a couple of spoonfuls of baking soda.

2) Screw on the lid and leave the jar on the counter for a few hours while you do other things, or you can even just leave the jar that way overnight.

3) Then, rinse out the jar and give it a thorough washing with soap and water.

4) For the last step, heat a pan of boiling water on the stove and scald the jar as if you were sterilizing it before canning (using the proper tongs to drop it into the water, of course.

Once the jar has been scalded, the musty smell should be gone, and the jar should be ready to use.

The one exception that hasn’t worked for me with this method is jars that I used to store strong-smelling things for a long period of time. For example, I kept some rosewater in a little Mason jar for a couple of months, and no amount of baking soda, washing, scalding, etc. has completely gotten rid of that slight flowery aroma. So, that jar is now reserved only for non-food uses since I don’t exactly want my food picking any of that soapy, perfumy flower scent.

But for other jars that have just developed a slight “off” smell from sitting around too long, this method works great!

And of course, the best way to keep Mason jars from smelling musty is simply to use them. Use them all! Make jam and applesauce. Use them to store leftover soup or stew. You can even use them to store pantry staples like oats or loose-leaf tea or chocolate-chips. Unlike plastic bags, glass jars are stack-able, they’re BPA free, and with some cute, homemade labels, they make for a much prettier pantry too!

What’s your favorite way to use Mason jars?

I just saw the easiest way to get rid the smell from mason jar .. Just add 1 teaspoon of mastered sauce or powder and add hot water to the smelly jar with the lid on and shake the jar, then open the lid throw away the mustard water and wash ur jar clean that's it. I just tried this method and it worked amazingly.

That sounds like a great tip. Thanks for sharing!

As soon as I put the jar in the hot boiling water, it cracked :p oh well. Lesson learned.

I've done that before too! Now I always try to remember to run the jar under warm water at the sink first, especially during the winter when the kitchen is colder.

I didn't realize you could freeze liquids in a mason jar! Are there any precautions to be taken with this (other than don't fill completely full)?

You just have to make sure that your jar is a freezer-safe one. I know that Ball makes freezer-safe versions of the pint and half-pint sized ones, but the larger jars like the quart-sized ones aren't freezer safe. I would only recommend freezing liquids in jars that specifically say on the package that they are freezer-safe.

I also let the jars cool down first if I have hot liquids in them before I put them in the freezer because the extreme temperature change from hot to cold (or vice versa) could make the glass crack.