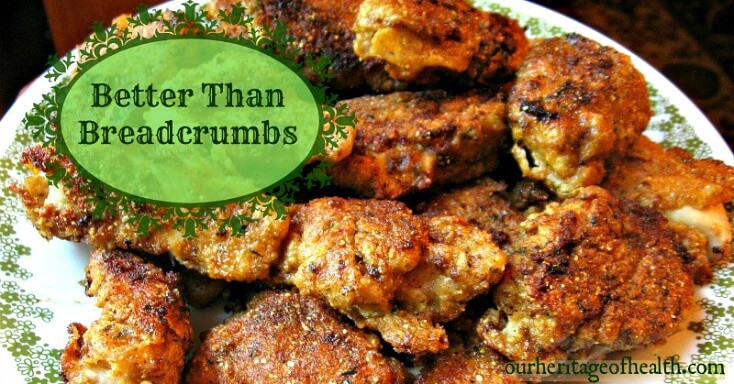 Up until about a year ago, I used to use store-bought breadcrumbs for breading chicken for chicken fingers. I thought I was doing something healthy since I was making the chicken myself rather than eating fast food chicken fingers that were fried in hydrogenated oils. That is, I thought it was healthy until I finally read through the ingredient list on the back of the breadcrumb container.

The main part of the breadcrumbs was “enriched bread.” Ok, I thought, at least the first ingredient is bread, right? That’s got to be good, right?

Wrong. This “enriched bread” is really made up of 9 ingredients, including the infamous high fructose corn syrup and partially hydrogenated vegetable oils. The only real food ingredients among the 9 were wheat flour (which was probably processed and bleached) and water.

The first part of the ingredient list was enough to make me rethink my so-called “healthy” decision. What really made me want to toss those store-bought breadcrumbs and run away as fast as I could, though, was the rest of the ingredients. According to the list, those breadcrumbs “may contain” up to 44 different ingredients! 44!

And wait a minute….. did that say “may contain?” Like they can’t even say for sure which ingredients are in there?! Something is definitely wrong with that.

Once I had realized how unhealthy and processed those store-bought breadcrumbs really were, I decided to just make up my own homemade breading recipe for chicken. It might take a bit more work and time to make up a breading mixture than it does to open a can of breadcrumbs, but it’s so much healthier, I think it tastes better, and it’s also probably a little bit cheaper too.

This is the recipe I usually use for breading:

* Note: I usually work with dried and ground herbs for this recipe.

This recipe makes more than enough for 2 lbs. of chicken, and it would probably be just about the right amount for 2.5 lbs. You could also cut the recipe in half if you have less chicken. I usually end up with a little bit of extra breading when I use this recipe for 2lbs of chicken, but I’d much rather have too much than not enough. Nothing is more annoying or inconvenient than having to stop in the middle of making chicken to wash your hands and mix up a whole new batch of breading mixture.

To bread the chicken, I use the usual method of dredging it in the flour mixture, then dipping it in a mix of milk and eggs, and then another dunk into the flour mixture. I like to use my cast iron pan (this is the type of skillet I use)

, and I use a heat-stable fat for pan frying the chicken.

* The most traditional cooking fat for fried chicken would be lard, but Butter, tallow, or coconut oil would all work well too since they can all hold up to high heat. Finding a good source of lard or tallow from healthy, pasture-raised animals isn’t always easy, though, depending on where you live, so butter or coconut oil might be better options. If you don’t want your chicken to have a coconut taste, I would recommend using an expeller pressed refined coconut oil because it has a neutral taste.

The seasonings in this recipe can be tweaked depending on individual preference, and the dry part of the mixture could even be prepared in bulk a head of time and then stored away for future use so you don’t have to mix up the ingredients each time.

And the best part about making your own homemade breading is the fact that you can count exactly how many ingredients there are and you know exactly where each ingredient came from since you mixed everything up in your own kitchen. There are no hidden ingredients or weird processed junk. Just simple, real foods.

Do you have any foods like store-bought breadcrumbs that you thought were healthy options and then discovered that they really weren’t?

This post is linked to Make a Move Monday at Simply Made Home, Hearth and Soul at Elsa Cooks, and Fight Back Friday at Food Renegade.

[…] The first part of the ingredient list was enough to make me rethink my so-called “healthy” decision. What really made me want to toss those store-bought breadcrumbs and run away as fast as I could, though, was the rest of the ingredients. According to the list, those breadcrumbs “may contain” up to 44 different ingredients! 44! Credits: Better than Breadcrumbs: Homemade Breading Recipe – Our … […]

thanks for posting. Instead of wheat/corn we use coconut flour, and coconut oil for frying, it's delicious.

This sounds great! How long does it keep in an airtight container? Could it possibly be frozen for longer storage? Thanks!

I've had the same thoughts and problem with store bought bread crumbs, seemed such a shame to put it on my organic table. Instead I buy organic salad croutons (rosemary seasoned). either throw them in the food processor or before opening the bag, get your hammer out and crush them to tiny pieces. DELICIOUS.

I make my own bread crumbs and croutons - so much healthier!