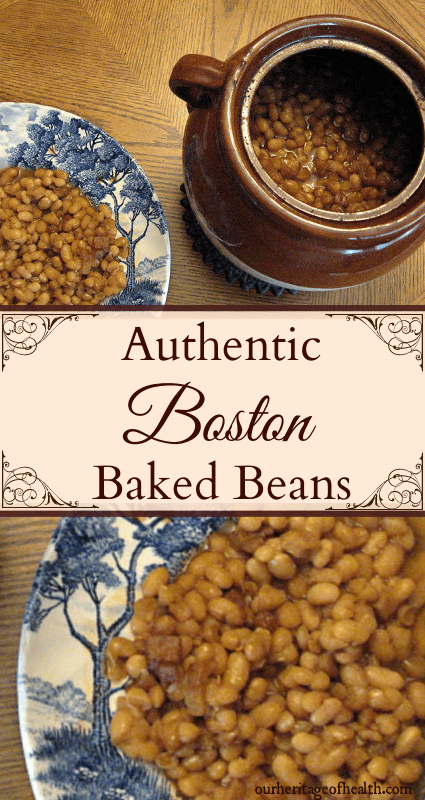 Boston baked beans are a delicious old-fashioned New England tradition, but most store-bought baked beans today are full of all sorts of questionable ingredients. Instead of store bought beans, I wanted to find a truly authentic Boston baked beans recipe that used only real, natural ingredients that I could make myself at home.

The recipe I used came from the Boston Cooking School Book by Fannie Merrit Farmer (published in 1896). This is the description of the recipe (or receipt if you want to use the period term) as printed in her book:

“Pick over one quart pea beans, cover with cold water, and soak over night. In morning, drain, cover with fresh water, heat slowly (keeping water below boiling point), and cook until skins will burst . . .

Cover bean-pot, put in oven, and bake slowly six or eight hours, uncovering the last hour of cooking, that rind may become brown and crisp. Add water as needed. Many feel sure that by adding with seasonings one-half tablespoon mustard, the beans are more easily digested. If pork mixed with lean is preferred, use less salt.”

This recipe is quite long, but it actually gives a pretty good description of the ingredients and how to prepare and cook the beans, which is a lot more than most old-fashioned recipes will tell you! This recipe would make a lot of beans, though, so unless you’re making beans to feed a crowd, you might want to cut it in half like I did. Cutting the recipe in half will give you about four cups of cooked beans.

Even though the recipe instructions might seem a bit involved at first, these beans were actually really easy to make. I was surprised by the fact that the color of the cooked beans was lighter than most canned baked beans I’ve had (maybe because there are no artificial colors in these homemade ones?), but I thought that they tasted as good or even better than store-bought beans. And the fun of trying an authentic Boston Baked Beans recipe is definitely something you can’t get from store-bought beans in a can!

Here is my modern adaptation of the recipe:

I cut up my salt pork in small pieces so it could be eaten with the beans instead of leaving it as one large piece to take out, and I simmered the salt pork first in a saucepan until it was cooked through. If you can't find salt pork, or if you prefer bacon, you can use that as a substitute instead. I've used bacon several times when making this recipe, and it's delicious!

As an Amazon Associate and member of other affiliate programs, I earn from qualifying purchases.

Other Baked Bean Recipes to Try:

Baked Beans – Tossing the Can by Jen and Joey Go Green

I'm am going to try these tomorrow, as I have been looking for a more authentic recipe. What kind of molasses did everyone use? There are 3 different kinds (light, dark, and blackstrap), as well as sulphured or unsulphered.

The molasses I've been using is unsulphered and I believe it's dark molasses. It's not blackstrap, but still seems relatively dark. I would think that blackstrap would probably work ok for this recipe, though, too since beans are a savory food rather than a sweet food.

I am making baked bean for my husband. We typically try to eat pretty low carb, but with this covid 19 pandemic going on, he has asked for real baked beans. We got marfax beans in Amish country this weekend. I’m pretty excited to try my bean pot for the first time! Thanks for the recipe.

That's exciting that you get to try out your bean pot for the first time! I hope they turn out well for you! :)

The dark color of baked beans is not achieved through the ingredients (alone at least). The beans darken considerably during the last couple of hours of cooking. They get to that deep brown color when they are done, meaning they have cooked thoroughly and it happens at the very end of the process. So be patient all, and try to add time sweet time to your cooking when you cook these. They will also absorb more of the flavors of the sugars especially. If you cook them longer I promise you they will be the best baked beans you have ever eaten. Just trust me I use this recipe and have been for years!

Thanks so much for sharing your insight about the color and the baking time with us!