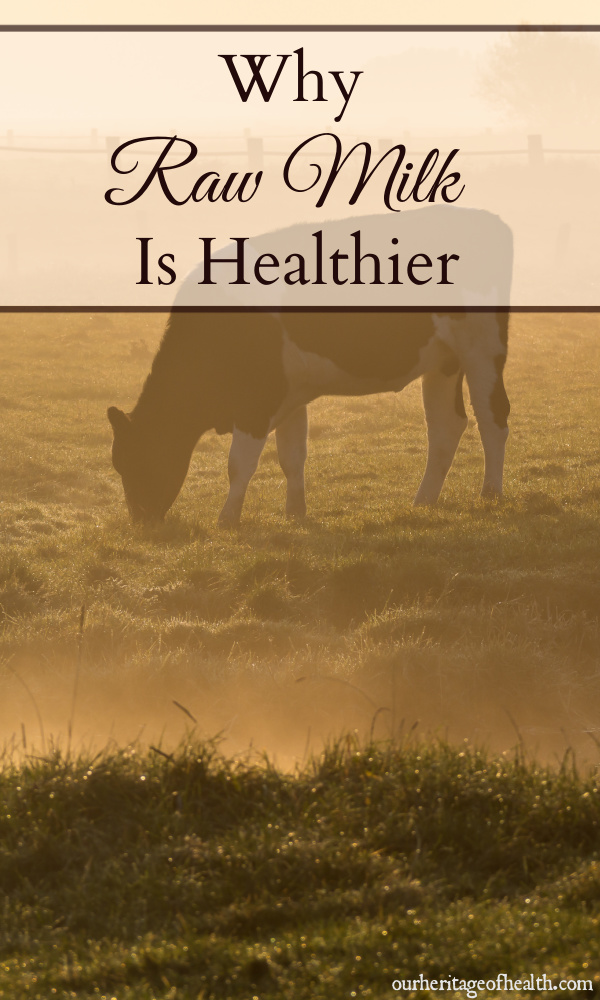 This past weekend, I tried raw milk for the first time. It was the first time I’ve had a drink of milk in about twelve years, actually.

When I was growing up, I drank milk somewhat regularly. I was never really a big milk drinker, but I would have it with cereal in the morning. When I was in middle school, though, I started having more of a distaste for milk. It just didn’t appeal to me at all, and I had little desire to drink it. Smelling and tasting rancid milk that had spoiled after our house had lost electricity for a couple of hot summer days probably didn’t help my desire to drink milk much either. I also started to notice that I didn’t really feel very well if I drank a lot of milk. So, eventually I basically just stopped drinking milk.

But after learning about the differences between conventional milk and raw milk from grass-fed cows, I decided to give milk another try.

The Problem With Conventional Pasteurized Milk

The milk that I always used to drink with my cereal was a grocery store brand of 1% pasteurized and homogenized milk. These are some of the qualities of that milk (and many other store bought pasteurized milks) that made it a less healthy option than raw milk.

(And, of course, it’s important to mention that none of the information in this post should be taken as health or medical advice, and it’s important to do your own research to help you make the decision of which type of milk is best for your to drink.)

First off, that milk had a very low fat content. Not quite as low as skim milk, but pretty close. Even though everybody nowadays seems to be afraid of fat, whole milk is actually much healthier than skim or low fat milk. The fat content of the milk helps your body to digest the proteins in the milk more easily, and it also helps with the absorption of the vitamins and minerals in milk, especially since many of the vitamins in milk are fat-soluable vitamins.

Second, the milk I used to drink was pasteurized. Pasteurization changes the proteins in milk, making them much harder to digest. Pasteurization also kills all of the beneficial enzymes and good bacteria in the milk that help with digestion and with absorption of vitamins and minerals.

The good bacteria in the raw milk actually act as a natural protection against any possible bad bacteria that might be in the milk. Pasteurization can also diminish the vitamin and mineral content of the milk. Some vitamins (like B6 and B12) are almost completely destroyed during the pasteurization process and some others, like Vitamin C, are greatly reduced.

The milk I used to drink was also homogenized. Homogenization is another modern process that alters the natural structure of the milk by using intense pressure to break the fat particles of the milk down until they are so small that the cream no longer separates and rises to the top. This process (like with pasteurization) changes the structure of the milk, making it harder for the body to digest.

Also, the milk I was drinking came from cows which, sadly, were most likely raised in confinement on large factory farms rather than allowed to graze on pasture on small family farms. This would really be a subject for a separate post, but many cows today are raised in very unhealthy and often even inhumane environments, crowded together indoors in filthy living conditions, fed all kinds of things that aren’t part of their natural diet, and never able to graze on fresh grass.

Milk from cows that are raised in such deplorable conditions is definitely not something I want to be drinking. No wonder the milk I used to drink made me not very well! It only makes sense that healthy milk would come from a healthy cow.

Why Raw Milk Is Healthier

Once I started reading more about traditional foods, I learned about raw milk. I had always just assumed that milk was milk, and I hadn’t even realized that raw milk existed and that it could be safe and even beneficial to drink.

It makes perfect sense to me now, though, that raw milk would be healthier, because it is a whole, unprocessed, traditional food. Pasteurization of milk became a common practice only in the last century. Before that, people drank raw milk and ate dairy products made from raw milk or from cultured raw milk like cheese and butter.

Because raw milk isn’t pasteurized or homogenized, all of the proteins, enzymes, beneficial bacteria, and vitamins and minerals are left intact and in an easy to digest, highly-absorbable form. The enzymes in raw milk that would have been killed during the pasteurization process, make important minerals such as Calcium much easier for the body to absorb (and isn’t Calcium one of the main reasons why many people drink milk anyways?) The full fat content of raw whole milk also makes Calcium and vitamins easier to absorb.

Another benefits of raw milk is the fact that many people who have a hard time digesting regular milk often have no problem with raw milk. Since raw, unpasteurized and unhomogonized milk has all of the beneficial bacteria and enzymes intact as well as the full amount of fat to help the body process them, raw milk is much easier to digest.

(Note: A sensitivity or intolerance to milk or dairy products is different than an allergy to the protein in the milk. Since true allergies can be very serious and life-threatening, always check with a medical professional if you’re not sure about it.)

The thing that really makes me realize how much better old-fashioned raw milk is, though, is the fact that raw milk doesn’t spoil the way that pasteurized milk does. Milk that has been subjected to modern pasteurization and homogenization will eventually putrify and turn rancid, and you can’t do anything with it except pour it down the drain.

Raw milk, on the other hand, just turns sour from lactic-acid producing beneficial bacteria. Not sour as in spoiled, but sour as in tangy like buttermilk or sour cream. Raw milk that has soured is still perfectly ok to drink (if you don’t mind the sour taste) or you can use it for things like making homemade yogurt and for baking.

Now I understand why so many old-fashioned recipes call for sour milk! I have several recipe books from the 1800s, and many of the recipes specify either sour milk or sweet milk. With the lack of refrigeration back then, fresh milk would have soured pretty quickly, especially in the summer, so old-fashioned resourceful cooks found ways to use up their sour milk. Even when raw milk goes sour, it’s still useful for something else!

A few great resources I’ve found for more information about raw milk are:

Well, this post ended up being quite a bit longer than I had planned! To keep this from getting any longer, I’ll wait until my next post to talk about some of the important things to look for when finding raw milk, the safety of raw milk, and what my experiences with raw milk have been like so far. (Read part two of this post about what to look for when you’re buying raw milk here)

Have you ever tried drinking raw milk before?

This post is linked to Make a Move Monday at Simply Made Home and Fight Back Friday at Food Renegade.

Great post (a fantastic explaination!) Have you ever read "Real Food?" It is another good book that has a great explaination of raw milk and other real foods. Thanks for linking up. I always look forward to reading your posts!

I haven't read "Real Food" yet, but it looks like a good one! I'll have to add it to my list of books I want to read (which seems to be getting longer every day!)