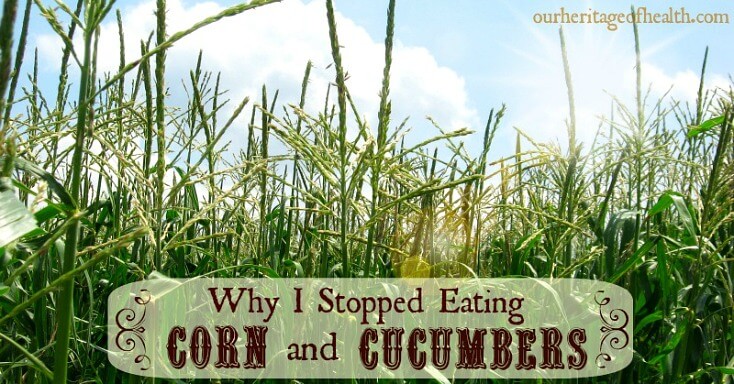 The last time I sat down with a warm, buttery ear of corn or a crisp fresh-from-the-garden cucumber was at the beginning of October.

The reason I’m boycotting those vegetables right now isn’t because I don’t like them, though. I LOVE corn on the cob and fresh cucumbers! They’re two of my favorite veggies, actually.

The reason I’ve stopped eating them is a simple one: I live in New England, and corn and cucumbers aren’t in season locally right now.

Why I’ve Decided to Eat Seasonally

It wasn’t until a couple of years ago that I had even thought about the concept of eating seasonally. Since the grocery stores carry the full array of fruits and veggies year-round, I figured there was no reason not to eat tomatoes in March or strawberries in January. When I walk through the produce section of the grocery store, now, though, I have a completely different view of what is on those shelves.

Here are four reasons why I’ve decided to forgo corn, cucumbers, and other summery produce during the colder months:

It’s hard to imagine it now, but there was a time when it wasn’t possible to buy cartons of blueberries or slices of watermelon wrapped in cellophane during the winter months. Except for those living in climates warm enough to grow fresh produce year-round, the majority of people ate only produce that was seasonal.

During the warm summer months, people could enjoy the full abundance of summer veggies like corn and cucumbers and tomatoes. In the winter time, though, the only time they would eat those veggies would be if they had preserved the summer’s harvest as pickles, sauce, etc.

In the colder months, the focus would be on the hardier root vegetables such as carrots, parsnips, and potatoes. Since fresh fruit was only available in the warmer months, it was enjoyed to the fullest when it was abundant and then either dried or made into jams and chutneys to be saved for the months when it couldn’t otherwise be found.

It’s almost always cheaper to buy local produce that is in season than to buy out-of-season produce from farther away. There are probably some exceptions to this, but most of the time, the time to get the best price for any produce is the time when it is in season.

Strawberries, for example, are abundant in June where I live, so it’s pretty easy to find fresh strawberries for a really good price. In the middle of the winter, though, the only strawberries available are ones that were grown miles and miles away in California, and they cost a fortune (not to mention the environmental costs connected with transporting all of that produce across the country too!)

If you want to be even more frugal and economical, you could go to a farmer’s market and buy a large amount of your favorite local produce when it is in season and at its cheapest price and then preserve it by drying, canning, lacto-fermenting, freezing, etc. so that you can enjoy the bounty of the summertime during the winter months without having to pay full price for produce that has likely lost its freshness and its flavor by the time it reaches the store.

3) Seasonal Produce is Fresher and Healthier

When you buy produce that is in season, you are able to buy local produce that is grown just a few miles from where you live. One of my favorite parts about the warmer weather is being able to get fresh-picked lettuce and other veggies at an organic farm near where I live.

If I were to buy the same veggies from a grocery store, though, the chances are that they would have come from another state and possibly even another country and would have traveled for several days before sitting for several more days on the grocery store shelves.

All in all, a week or even longer than a week could have elapsed between the time that the veggies were harvested and the time that I put them on my plate rather than being able to eat them on the very same day that they were picked.

Since produce begins to lose nutrients and flavor once it is harvested, the way to get the most nutritional benefits and enjoyment out of your produce is to eat it as soon as possible after harvesting.

It wasn’t until a couple of years ago that I first noticed the difference between freshly-picked, grown-in-season produce and the typical out-of-season produce at the grocery store. The first time I had ever tasted a fresh-picked garden-grown tomato I was shocked by how much flavor it had compared to the bland, watery tomatoes I was used to eating from the grocery store.

Even if seasonal produce wasn’t traditional, cheaper, and healthier, it would still be worth it to eat seasonally for the taste alone, in my opinion!

While it might be nice to have the convenience of getting any kind of fruits and veggies at the grocery store at any time of the year, most of those fruits and veggies are picked before they have a chance to fully ripen so that they won’t spoil in transit to the grocery store, and the price to pay is produce that pales in comparison to the flavor of fresh-picked fully ripe seasonal produce.

I’m not missing out on anything

Even though there are several fruits and veggies that I’m not eating right now, I don’t feel like I’m missing out on anything. While I wait for corn and cucumbers to come in season again, I’ll enjoy all of the seasonal cold-weather produce like root veggies and the rest of the frozen berries and applesauce I made this past summer and fall. And before long it will be the season again for asparagus, lettuce, spinach, peas, and, my favorite: strawberries!

I don’t go crazy trying to avoid all unseasonal produce 100% either. While I haven’t bought a cucumber from the grocery store, I’ve still had the occasional slices of cucumber in salads at restaurants and at church suppers. And if someone offered me a chocolate-covered strawberry, I wouldn’t pass it up just because it wasn’t in season either 🙂

For the most part, though, I’ve been putting my focus on enjoying each season’s variety of fresh produce in turn and enjoying the rest of what I “put up” from last summer’s harvest from my garden. 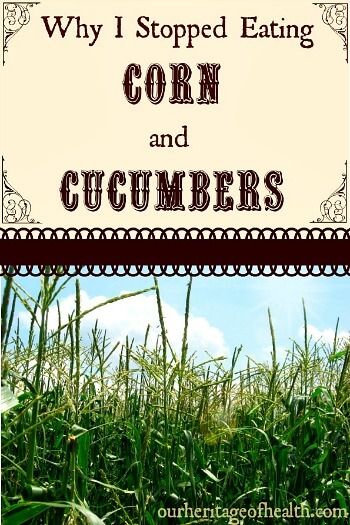 Are You Stuck in a Veggie Rut? How Eating with the Seasons Can Break You Out of It | Our Heritage of Health

[...] Farm in Concord for those of you who live in Eastern, MA). I’ve been loving being able to get freshly picked seasonal produce from them, and, because they only sells what they grow themselves during each season, I’ve [...]

I love this concept. We do not 100% eat seasonally but we are at about 80% of the food we eat is seasonal. They taste so much better in season, and that is how I got my kids to eat Brussels sprouts

I live in California but still trying to eat seasonally. Despite our mild climate there are still lots of foods that taste better in season or are only available in their true season. For instance: Apples are seasonal to fall but often stored in warehouses all year long. I don't even consider eating apples not in season. I believe and have read that stored apples aren't even worth eating because their nutrition slowly goes away in storage. The best thing about California is being able to grow and eat all kinds of greens in the winter. That is when they grow best and so I guess for us winter is the season for greens. I also prefer the taste of seasonal fruit and veg.

Not ready to go there yet. But I admire you for it. I have been doing some pondering lately about how eating out of season affects us, health wise. I have never tried it, so hard to say. Baby steps. Maybe I will get there [email protected]

Impressive! I live in New England too, but haven't been able to commit to eating seasonally.

from a fellow VGN mama at Eco-Mothering...