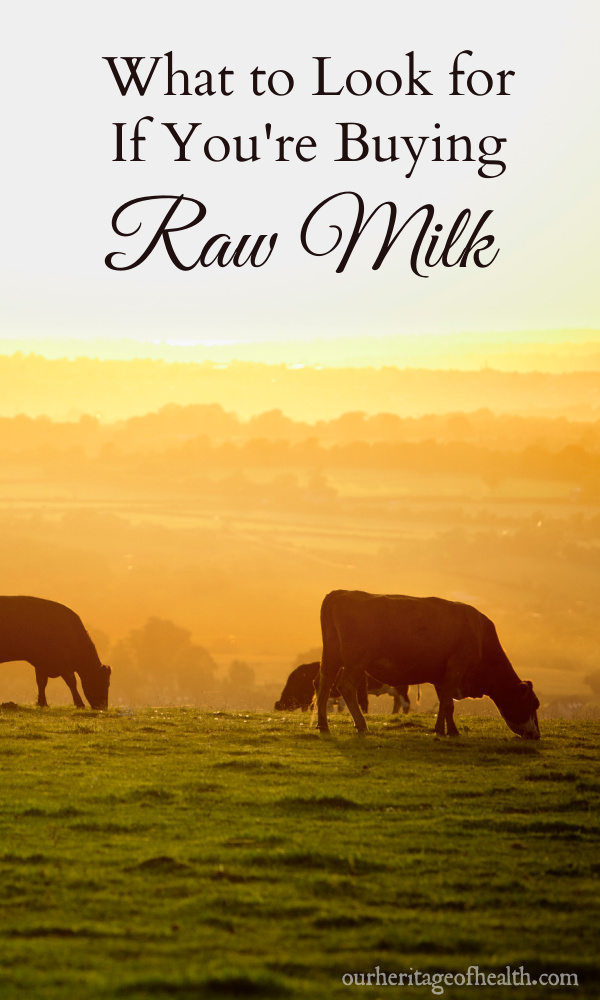 In my last blog post, I talked about why raw milk is healthier and about some of the benefits of drinking raw milk. But I wouldn’t feel comfortable drinking raw milk from just any cow. When it comes to milk that isn’t pasteurized, quality is really, really important. I would never want to drink raw milk from an unhealthy cow raised in a factory-farm environment.

What to Look For When You are Buying Raw Milk

The good news is that most farmers who sell raw milk seem to genuinely care about the way their cows are raised and about producing raw milk of excellent quality. When I was looking into finding a place to buy raw milk, these are the factors I was thinking about as far as quality is concerned:

Where to Find Raw Milk?

To find information about where to find a good source of quality raw milk in your area, check out the Realmilk.com page here. This web page has listings by state for good quality raw milk farms in the USA. Unfortunately, raw milk isn’t easy to find in some states. Hopefully someday that will change! In Massachusetts where I live, raw milk isn’t available commercially in stores, but it is legal to purchase it directly from a farm. I had to travel about 45 minutes away to get my raw milk, but at least I was able to find it.

At the farm where I bought my milk, the cows are pastured and fed grass and hay, and the grass the cows feed on has not been treated with pesticides or herbicides. Even though the farm is not officially certified organic, they are very close to being organic. One of the best parts about going to get my milk was that I was able to actually see the cows out in the field grazing on the fresh spring grass. Some of them came right up to the fence where I was standing and let me pet them. It’s such a beautiful sight to see happy, healthy cows roaming a pasture thick with green grass shimmering in the sunlight.

My Experience with Raw Milk So Far

I bought one gallon of raw milk to start with, but I plan on getting more soon when I get a chance to drive down to the farm again. It was really exciting to see the cream line after I had let the milk settle in the fridge for a little while. A cream line is an old-fashioned occurrence that you’ll never see on regular grocery-store milk.

As far as taste is concerned, it’s really hard for me to judge the taste of the raw milk compared to pasteurized milk because it’s been so long since I’ve had a drink of regular pasteurized milk.

The raw milk definitely tastes rich and buttery and fresh. It’s almost like I can taste the fact that the cows have been eating grass. Not that it tastes like grass, but it tastes like the milk came from cows eating fresh grass (if that makes any sense…)

I know a lot of people say that raw milk is one of the most amazing things they’ve ever tasted, but, to be completely honest, I don’t feel that way quite yet. It still feels kind of weird to me that I’m even drinking milk at all after going for so many years without drinking it, so I’m definitely still getting used to the taste. Once I’m more accustomed to the idea of drinking milk, though, I’m sure the taste will seem more amazing to me as well.

So far, the only downsides I’ve found have been the distance I have to go to get the raw milk and the cost. (Raw milk does sour fairly quickly – what was left of my gallon went sour after about a week – but I don’t really consider that to be a downside because I’m looking forward to using my sour milk for old-fashioned baking now!)

I do wish I lived closer to a raw milk dairy. Even though 45 minutes isn’t too bad of a drive, it’s definitely not as convenient as going to the grocery store that’s only five minutes away. Raw milk is also considerably more expensive than grocery-store milk. I paid $9.50 for a gallon, which I realize is probably a fair price considering all the work the farmers put in, but it’s still quite a lot of money. The cost varies depending on where you live, but raw milk is never likely to be as cheap as a store-brand of milk because of the extra costs involved in running a small farm that focuses on quality rather than on quantity.

I guess it’s one of those “you get what you pay for” kinds of things. The milk is of such a higher quality, that I think it’s worth the extra money, and I don’t mind paying it. The cost of raw milk might not be something that some people with large families can afford on a regular basis, though. I’m not trying to buy milk to feed a family with five or six children downing huge glasses of milk every day, so a gallon of milk lasts me much longer than it would for someone with a large family.

I’m hoping that someday soon raw milk will gain in popularity and become much more accessible and affordable for everyone who wants it!

Resources:
I listed these raw milk information resources in my last post, but I want to mention them again for those who haven’t read the other post:

This post is linked to Sunday School at Butter Believer and Make a Move Monday at Simply Made Home.

OK, me again sorry. We went and got our milk yesterday and I get so exctied to be the first to open the milk and skim the cream off the top for my coffee. If you are a coffee drinker you have to try it. It will make a fantastic coffee!

Have you tried making your own yogurt? Going out to the farm to get milk is not always easy. If you can get more and preserve it to make it last longer it helps!

That's so exciting that you got to skim off the cream! I don't usually drink coffee often, but I might just have to try that with my tea :)

I haven't tried making yogurt yet, but it's something I'd definitely like to do. Yes, getting more at one time and preserving it is a great way to cut down on extra trips out to the farm!

I actually froze some of my fresh milk in freezer-safe pint-sized Mason jars. I took one out of the freezer the other day and defrosted it, and it still tasted as fresh as the day I bought the milk :)

You know you are a food nerd when...you see a follow up post on raw milk, get all excited and have to stop everything to read it! Thanks for linking up and sharing your story and research!

Ha ha, I've never heard the term "food nerd" before, but it definitely applies to me!