Part pie, part coffee cake, and absolutely delicious. If you’ve ever been in Lancaster County, Pennsylvania, chances are you’ve probably had a slice of Shoo Fly Pie (or more than one!)

On my most recent trip through Lancaster, I sampled Shoo Fly Pie at two different smorgasbords. Both slices were delicious, but I found myself wishing I could try a real food version of the pie, one where the crust wasn’t made with Crisco and the filling was made with molasses and not other sweeteners like corn syrup.

So, I decided to try making a traditional Shoo Fly Pie myself so that I could use real, old-fashioned ingredients and so that I could have a taste of Amish country without having to drive eight hours to get there!

A Bit of Shoo Fly History

Where does the name come from? I don’t know if any one really knows for sure, but there are several different theories about the history of it including molasses brands, the “shoo fly don’t bother me” song, the stickiness of the pie attracting flies, etc.

Shoo Fly Pie wasn’t traditionally a fancy special occasion dessert. Because it doesn’t require any eggs or milk, this pie would have been a frugal dessert for time when eggs and milk were scarce, especially during the winter months.

In old cookbooks, Shoo Fly Pie is sometimes referred to as Centennial Cake or Granger Pie. Somewhere along the way the name transitioned to Shoo Fly as we all know it today. For more information about the history of Shoo Fly Pie, check out this article about shoo fly  pie.

I wanted to try a recipe that was as close as possible to an old-fashioned traditional Shoo Fly Pie, so I adapted a recipe found in Pennsylvania Dutch Country Cooking, written by William Woys Weaver

(Update: I recently made this recipe again, and this time I tried adding a bit more salt, using brown sugar instead of regular sugar, adding a bit of allspice, and mixing some maple syrup in with the molasses, and I liked the way it turned out, so I’ve added those changes to the recipe below.)

Note: As with all recipes, organic and natural ingredients are best if possible (eg. butter from grass-fed cows, unrefined sugar and salt, pasture-raised animal-products, etc.). I’ve included links to some of the brands that I like to use and would recommend.

If you use lard for your pie pastry like some old-fashioned recipes call for, I would only recommend using lard from healthy, pasture-raised pigs and NOT the lard you might find in a grocery store. The grocery store lard is usually partially hydrogenated and comes from unhealthy animals. If you can’t find good quality lard from a local farm, I would suggest using butter or coconut oil instead.

For the pie pastry, you can use any recipe that you like, or if you don’t already have a favorite recipe, you can try this simple pie crust recipe that I recommend.

* If you’re using salted butter, you can use a bit less salt, or if you’re like me and you like the blend of salty and sweet, you could keep the full half teaspoon of salt. I used a half teaspoon with unsalted butter the last time I made this recipe, and I found myself wanting a bit more salty flavor to balance out the sweetness, so the next time I make this I may make it a rounded half teaspoon.

* I would recommend using regular unsulfured molasses rather than blackstrap molasses for this recipe. Since the molasses is the only sweetener for the filling, blackstrap would make for a pretty bitter filling. If all you have on hand is blackstrap, though, you could replace a couple of spoonfuls of molasses with a couple spoonfuls of pure maple syrup for a molasses flavor that’s not quite as overwhelming. Or, if you prefer a sweeter pie and a lighter colored pie, you could still use a half cup of regular molasses and a quarter cup of maple syrup even when not using blackstrap molasses.

1) Preheat your oven to 425 degrees and prepare your pie pastry. If you’re using my favorite pastry recipe (above), mix the salt in with the flour, and then cut the lard (or lard/butter combo) into the flour with a pastry blender. Then add the cold water and mix until a soft dough forms. Roll the pastry out and line a 9″ pie plate with it. (See note below about rolling out the pastry fairly thick and potentially blind baking.)

2) For the crumb topping, combine the flour, sugar, salt, cinnamon and nutmeg in a bowl, stirring to blend well. Then cut the butter into small pieces, and use a pastry blender to combine the butter with the dry ingredients until the mixture forms into delectable buttery crumbs.

3) For the filling, heat up your water in a sauce pan until it is warm (but not boiling.) Then take the water off the heat and stir in the molasses until fully blended. Next, add in your baking soda and stir well to combine. The mixture will look frothier as the soda reacts with the acid in the molasses.

4) Pour the molasses mixture into your pie pastry shell, and then sprinkle the crumb topping all around, adding a little extra to the sides. (Since the filling tends to slosh around a bit and absorb the crumb filling when you pick up the pie to put it into the oven, it might be a good idea to save aside a handful of the crumb topping mixture and sprinkle it around the pie after it has been in the oven for a few minutes to make sure you have an even distribution of topping.)

5) Bake the pie for 15 minutes at 425 degrees, and then reduce the oven temperature to 350 degrees and bake for another 35 minutes or so until a knife inserted into the center will come out clean.

NOTES: It’s best to prepare the pie pastry and the crumb topping before you mix up the molasses filling. Since the reaction between the baking soda and the molasses is the only thing making the filling rise up, if you let it sit out on the counter while you take the time to roll out a pie crust and mix up the topping, you might end up with a flatter pie.

Important: I would also recommend rolling out your crust on the thicker side, because the last time I made this, I rolled my crust too thin and when the pie was in the oven some of the molasses filling started leaking through the pie pastry and it made the pastry very sticky and started to come close to burning on part of the edge. So the next time I make this I’m planning to roll the crust thicker and maybe even to blind bake it for a few minutes before pouring the filling in. (If you’ve never tried blind baking before, you would roll out your pie pastry and line your pie plate with it and then bake just the pastry in the oven for a few minutes. Most people usually place a piece of parchment paper on top of the crust and then add either store bought pie weights or some dry beans to weigh the pastry down so that it doesn’t puff up when you’re blink baking it.)

This pie is quite similar to the ones I had in Lancaster, but I can definitely see and taste a difference in the filling of the pie. The filling of the ones I had at the smorgasbords were quite a bit lighter in color and much, much sweeter than my own homemade filling. I’m guessing that there might have been something else besides just molasses in those smorgasbord pies.

This pie is absolutely delicious, and I love the combination of pie crust and the cake-like crumb topping. If you love pie and you love coffee cake, this pie truly is the best of both worlds! 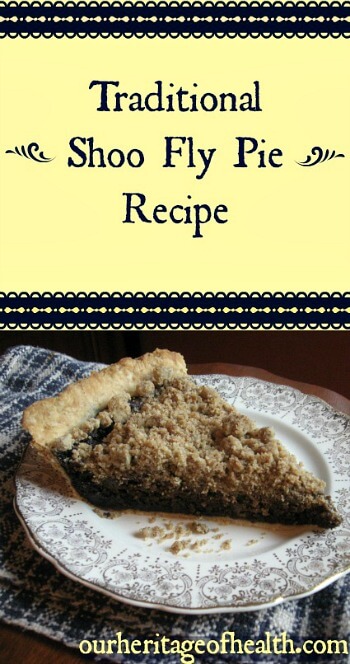 Other Pie Recipes to Try:

How long should I let it cool before cutting it?

I usually let mine cool for somewhere between 20 minutes and a half an hour.

Made one shoo fly pie recipe which called for two tablespoons of butter in the crumb topping. I thought to myself "This is going to be too dry, and it is not chopping into crumbs properly." Sure enough, it was thin and dry. This recipe called for four times as much butter and while I was making it the crumbs were too buttery and large....The pie is baking now, and the crumbs are lost in the sauce. I think I need to trust my own instincts sometimes during the process, and adjust some things accordingly.

Trusting your instincts is always a good idea :) Sometimes my crumbs get lost, too, so I've found that if I reserve some of them aside and put them on about 15 minutes or so into the baking time, then they don't get lost quite so much.

[…] Traditional Shoo Fly Pie from Our Heritage of Health […]

My mother now 100+ years of age was born in Crumpler NC. The 'crumb' pie she grew up with used cream of tartar instead of soda. The molasses was in a large measuring cup, the cream of tartar was added to the top surface, then the boiling water was poured into the cup while stirring the molasses. This mixture then frothed and was allowed to overflow the cup in to the piecrust.

That's really interesting! And I bet that's the sort of old-fashioned recipe that kids would love to "help" their mothers bake just for the fun of watching!

[…] Lori Elliott on the Our Heritage of Health […]