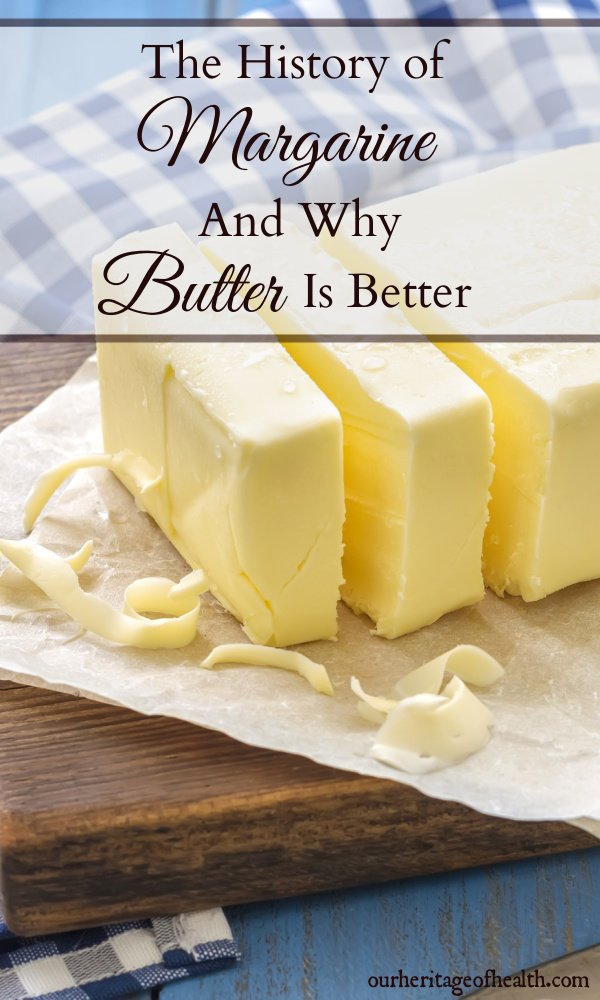 Me neither! I had never realized that margarine’s history was so controversial until I read about some of the history of how margarine came into being. Looking at the typical grocery store shelves today, though, you’d never think that margarine was ever in disfavor. Margarine is widely accepted now and even praised as a health food, but it wasn’t always that way.

A Brief History of Margarine

Margarine (aka oleomargarine) was first created in 1869 by a French chemist named Hippolyte Mège-Mouriès. It was originally made from beef fat and was intended to be a cheaper and less perishable option to regular butter. Over time, vegetable oils such as cottonseed and soybean oils replaced the animal fats, and by World War I margarine was almost exclusively made from these vegetable oils.

For more information on the history of margarine, this 19th century pamphlet gives a detailed account of the process used in the manufacture of margarine in the 1880s. (It’s very pro-margarine, though, so keep that in mind!)

The War on Margarine

Some people worried that the new-fangled margarine was an unwholesome, adulterated food while others loved its lower price and longer shelf-life. Margarine became even more popular in the 1930s and 1940s during the Depression and World War II because of its cheaper price and a scarcity of butter, and it’s popularity really took off in the second half of the 20th century when it became the trend to shun traditional saturated fats (such as butter and lard) and to use vegetable oil-based products instead.

In 1886, Congress passed the federal Margarine Act, which included requirements for annual fees for manufacturing licenses and taxes of two cents per pound on the margarine itself among the other detailed regulations about packaging and labeling, etc.

Because several states prohibited the sale of yellow margarine, margarine was often sold in its un-colored form with packets or beads of yellow dye that the consumer could mix into the product themselves as a way to get around the unappetizing color of the un-dyed margarine while still abiding by the regulations.

In 1950, after three quarters of a century of strife between the dairy industry and the margarine producers, Congress finally removed the tax regulations on margarine. Interestingly enough, this was the same decade that Ancel Keys published studies about the lipid hypothesis (which have now been disproven) and that the American Heart Association began warning everybody about the dangers of saturated fat and its link to heart disease. Margarine, of course, was the perfect substitute for those who were suddenly trying to avoid saturated fats.

Sources and Other Information About Margarine’s History:

Why Butter is Better

Unless you are aware of the history behind margarine, you would never know that it was ever anything other than the “healthier” alternative to butter. Whenever you see a TV commercial, it’s usually for a low-fat or lite “buttery spread” not for real, actual butter, and in many grocery store shelves, margarine products take up as much or more shelf space than real butter does.

From the 1870s to the 1950s, there was an on-going war over margarine, but hardly anyone seems to be concerned about fighting that war anymore. Margarine is considered by most to be a perfectly acceptable food that is healthier than butter while butter is often vilified as an artery-clogging food that should be avoided.

When you compare the two, though, and when you look at what’s really in them, it’s hard for me to imagine why anyone would prefer margarine to butter. Margarine is an artificial product that didn’t even exist until just 150 years ago (which really isn’t that long when you compare it to the thousands of years that butter has been around for.) Even the margarines that claim to be “made from natural ingredients” aren’t really natural at all once they have been so heavily processed and heated at high temperatures that the oils have oxidized (which will actually contribute to inflammation in the body, rather than being “heart healthy.”)

Butter, on the other hand, is a traditional food that our ancestors have been eating for generations. Butter is a simple, natural food that doesn’t require any heavy processing at all. You could even make it in your own kitchen if you wanted. And, unlike margarine which has only oxidized oils and other ingredients that you probably can’t even pronounce, real butter from grass-fed cows has enough nutrients that it could be called a superfood in my opinion.

Butter from healthy, grass-fed cows raised on pasture is an excellent source of these nutrients:

For more information about the health benefits of real butter, check out these articles:

Butter has centuries of tradition behind it, it’s full of important nutrients, and it tastes so much better than any artificial substitute. Isn’t it about time that we continue the 19th century fight against margarine and spread the word in support of traditional, old-fashioned butter? Let’s have a butter revival so we can start seeing more real butter from healthy pasture-raised cows on our grocery store shelves!

During WW2 my parents would have me or my sister sit in the kitchen and squeeze the package for about 10 minutes to get the bead of color worked into the contents. Was fun.. 76 years later, I still remember doing it... All the neighbors did it also. Butter was near impossible to obtain. Staten Island - Midland beach.....3 blocks from the POW Camp....Italian.

It does sound like it would be fun to squeeze the package and see the color work its way through. Your memories are a part of history that many people have only read about and haven't ever experienced themselves.

I used to drink my 2 or 3 cups of coffee each morning with nothing added until I learned to put about 3/4 tsp of butter in each cup. I never liked milk in coffee and certainly not those flavored creamers. Butter doesn't substantially changed the taste of the coffee, so I'm happy.

I'm not a regular coffee drinker, but when I do have it occasionally I usually put butter in, and I really like it that way too!

I don't buy the "butter is better for you" argument. And butter certainly isn't better for everyone--especially someone like me who has had an anaphylactic milk allergy since I was an infant. Unfortunately, 99.9% of all margarine contains butter, and my options are very limited. I currently use Smart Balance.

Yes, I agree that butter isn't for everyone and that certainly anyone with any type of dairy allergy would need to avoid butter. Butter is my personal preference, but I realize that it may not be the best option for everyone. That's unfortunate that you have such limited options since so many of them contain butter, but it's good that you found something that you're able to use.

Thank you all for this information. I found it quite interesting. My family and I prefer butter most of the time in moderation, but sometimes my finances call formargarine. I do get the so called healthy margarine.

Sometimes finances can't be helped, and it's completely understandable to get margarine sometimes when needed. And even though margarine isn't the same as butter, I do think that in most cases the margarine of today tends to be healthier than the margarine of 10 or 20 years ago.

Butter for me, Franky I don't care about the reasons, lets be honest, does anyone want to eat some over manipulated oil versus something naturally made, yes naturally made...all it takes is cream and a churn and you have butter, while we are at it look at the ingredients of the tubs of cool whip, not cream at all, go for the cans or make your own with a carton of heavy cream!

Yes, real butter is so simple to make (and tastes so much better in my opinion too!)