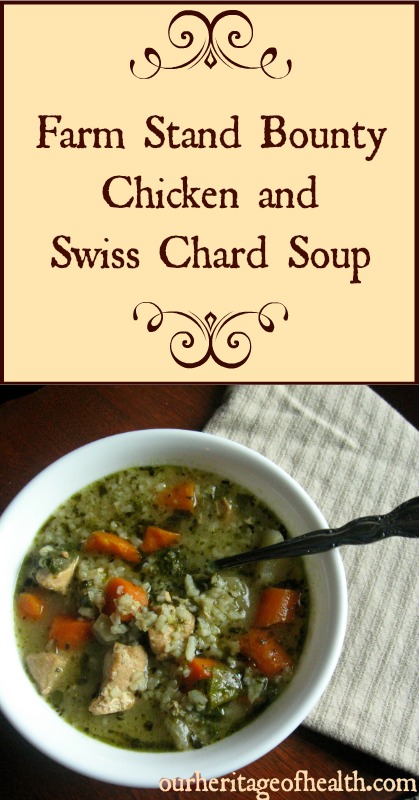 Among the many reasons why I love summer, one of the main reasons is the abundance of fresh local produce this time of year. It’s so nice to be able to stop by a farm stand or farmer’s market and get organic fruits and vegetables that were picked the same day and that are usually quite a bit cheaper than buying the same organic produce in a grocery store would be.

This past week I got a big bunch of Swiss chard from a local organic farm stand, and I knew it was more than I would be able to eat. I didn’t want to waste any of it, though, so I threw it into the pot of chicken soup I was making along with a few other veggies to make a chicken and Swiss chard soup.

The chard added a nice flavor to the soup, and it stretched out the amount in the pot, too, so now I have some extra to save in the freezer for any time I want a quick meal.

Here’s the recipe. And if you’re the kind of person who likes to use recipes with exact measurements, I’m really sorry, because I have no idea how much of each of the ingredients I used. I hardly ever bother measuring anything when I’m making soup. I usually go by the “just keep tasting it and adding more seasoning until it’s right” method.

I hadn’t even planned on using this recipe as a blog post, so I was just throwing ingredients into the pot without keeping track of how much I was putting in. After trying this soup, though, it was good enough that I wanted to share the basic recipe even though I can’t tell you exactly how much I used of everything.

This combination of seasonings is based on several recipes I’ve seen in old 19th century cookbooks. Parsley, marjoram, summer savory, and rosemary were common herbs to grow in a kitchen garden, and many old soup recipes use them for flavoring. The addition of nutmeg was also very common in old-fashioned recipes for chicken soups, and it adds a nice subtle flavor to the broth.

This recipe is very adaptable, so you can substitute ingredients or seasonings based on what you like or what you have on hand. You could use any fresh green instead of the Swiss chard, like spinach, kale, etc. You could use parsnips or rutabaga instead of the turnips or even omit them altogether if you only have carrots. And you could try different combinations of herbs based on what you have in your garden or spice rack.

(As with all recipes, organic ingredients would be the best choice if available. Pasture-raised chicken would be best, if possible, and homemade chicken broth would be the most nutritious option with the least amount of additives and preservatives. If you don’t have organic or pasture-raised ingredients available to you, though, whatever you have on hand will work fine. Homemade soup is still healthier and more natural than most store bought soups are.)

Note: If you don’t have a slow cooker, you could also use a large pot on the stove and let the soup simmer for several hours.