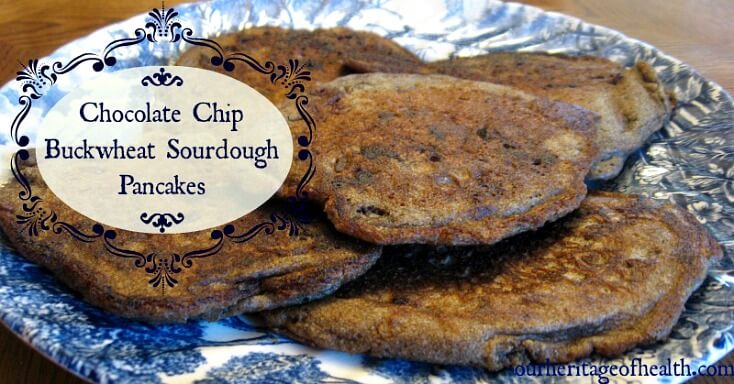 I love pancakes. Especially chocolate-chip pancakes! They’ve always been one of my favorite breakfasts ever since I was little. There were many relaxing Saturday mornings in my childhood when I would wake up to the sound of a spoon clinking against the mixing bowl and the aroma of the warm pancakes waiting for me when I came downstairs.

The sort of pancakes I used to eat weren’t very healthy ones, though. They were usually made from a boxed mixed, cooked in canola oil, and then topped with fake “syrup” made from GMO corn syrup with no real maple at all.

In my quest to find a healthier pancake, I turned to vintage cookbooks written before boxed mixes, canola oil, and fake syrup even existed.

Pancakes (or griddle cakes, or flap-jacks) were a pretty popular breakfast back in the 19th century if the number of recipes I’ve seen for them are any indication of their popularity. I’m not really surprised, though. They’re quick and easy to make, hearty and filling, and they’re delicious!

This recipe for chocolate-chip buckwheat pancakes is a loose adaptation of several different 19th century recipes I’ve come across. I say loose because it’s highly unlikely that anybody living in the 19th century would have added chocolate to their pancakes. Chocolate was a popular beverage of the time, though, so I suppose it’s possible that some ingenious person might have  decided to experiment with grating a bit of chocolate into their pancake batter. You never know 🙂

I also decided to take a bit of liberty with the amount of buckwheat flour in the recipe. Most 19th century recipes call for using only buckwheat flour, but when I tried making them that way, I found the buckwheat flavor to be a bit too strong for my taste. I decided to add some spelt and barely flour to balance out the taste a bit.

* For this recipe, I used some pre-ground buckwheat flour that I had, but I decided to use a grain grinder to grind some spelt berries that I had on hand. This grinder is the one that I’ve been using to grind my grain.

** This recipe calls for a sourdough starter. To see how I made my easy, low-maintenance starter, see my post about old-fashioned Homemade Yeast.

*** It’s best to use either purified or spring water. The chlorine in tap water could interfere with the sourdough starter.

1) The night before you want to make your pancakes, combine the flours, salt, sourdough starter, and water in a large bowl. Stir together until fully incorporated, cover, and set aside over night for about 12 hours. (The time doesn’t have to be exact. I let mine rise for 14 hours.)

2) The next morning, your batter will probably look quite bubbly. Mine didn’t look visibly risen in the same way that a loaf of bread would look, but it was a very light batter with lots of bubbles in it. The “bubbliness” might be more or less depending on your particular sourdough starter.

3) Add in your baking soda, whole cane sugar, vanilla, and stir until combined, and then fold in the chocolate chips. I cooked my pancakes at medium heat with butter in a cast iron skillet

. You could also try using lard or coconut oil. (I’d recommend using a pastured leaf lard or an expeller-pressed refined coconut oil if you don’t want your pancakes to taste like bacon or like coconuts.) You want to use just enough butter or oil so that they don’t stick. Otherwise, it cake make the pancakes turn out heavy if you have too much oil in the pan.

*The amount of pancakes you’ll end up will vary depending on how large you make them, of course, but you should be able to get at least a dozen pancakes out of this batter.

My favorite way to eat these pancakes is to slather them with grass-fed butter, sprinkle some cinnamon over them, and then drown them with Grade B pure maple syrup! 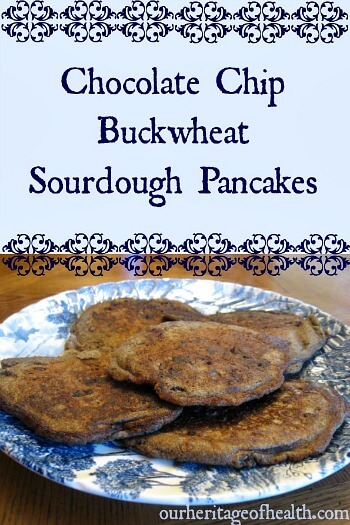 Thank you for a buckwheat sourdough pancake recipe that includes the overnight soaking. All of the other recipes I have found so far do not include the soaking, which I believe is important for neutralizing phytates and also improving texture. I look forward to making these.

I agree with you about the soaking. I hope they turn out well for you!

[…] plenty of breakfast foods that I thought looked delicious this week. I found a very interesting chocolate chip buckwheat sourdough pancake recipe that combines two of my favorite things: sourdough and chocolate into an interesting […]

Sounds good............Thank you for sharing with the Clever Chicks Blog Hop this week; I hope you’ll join us again!