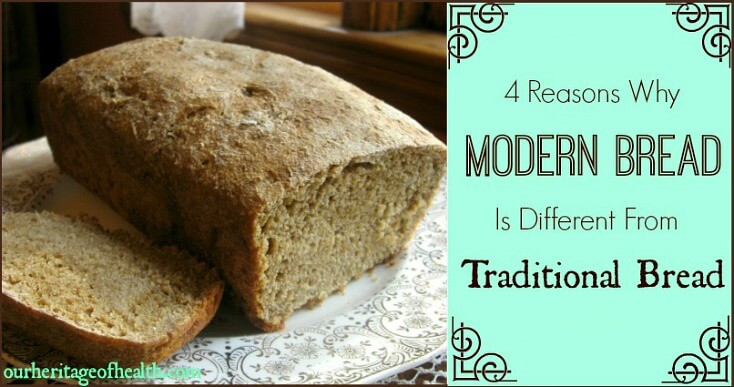 If you’re familiar with my blog, you’ve probably noticed that I’m not anti-wheat or anti-grain. In fact, I think the majority of the recipes I’ve posted so far have included grains in some form or another.

What can I say? I love bread, and cake, and cookies 🙂 (Eaten in moderation and homemade from real, natural ingredients, of course!)

This isn’t a post about why I choose to eat wheat when other people are choosing to avoid it, though, so I’ll just summarize by saying that I think that properly-prepared grains can be part of a healthy diet for those who don’t have a sensitivity to gluten. I also don’t believe that there’s anything inherently wrong with wheat or other grains.

I do believe, though, that the way modern grains are processed and made into bread can have detrimental effects on our health.

Over the centuries up until the 1960s, wheat has gradually changed, but the heirloom varieties such as einkorn, emmer, spelt, red fife, etc. still shared many similarities. The modern dwarf wheat hybridized in the 1960s, however, was a much more drastic change than the gradual transition over the centuries from einkorn to emmer to spelt.

This modern dwarf version of wheat is a high yield variety, but it also has a lower nutrient content than heirloom wheat and a different protein structure, which is considered by many to be more inflammatory than ancient varieties of wheat. (For more detailed information about the differences between the two, check out the sources listed at the bottom of this post.)

Traditional bread used homemade yeast as the rising agent. This yeast was usually either a sourdough starter, or a yeast made from distillery barm. Many 19th century cookbooks include recipes for making homemade yeast using hops, potatoes, or a flour-water-sugar mixture.

Modern bakers yeast as we know it today didn’t even exist until the late 1860s. Even then, it was slow to gain popularity at first because it was more expensive than making homemade yeast, and many housewives were reluctant to try something different from the yeast they were accustomed to using for baking.

Traditional homemade sourdough yeast essentially sours or ferments the dough, allowing anti-nutrients such as phytic acid to be broken down and making minerals and vitamins more accessible. Some studies are even showing that the sourdough fermentation process can make the proteins in wheat such as gluten easier to digest.

Modern bread, on the other hand, only rises for a couple of hours, and sometimes even less if using rapid rise yeast. And that’s for homemade bread. Many commercially-prepared breads include additives that allow them to rise even faster so that more loaves of bread can be produced in a shorter period of time.

Traditional bread recipes usually have just five or so ingredients: flour, water, yeast, salt, and either some type of sweetener or maybe herbs or spices. If you look at the ingredient list on a loaf of modern bread, though, you’ll almost always find a lot of extra ingredients that you can’t even pronounce.

These extra preservatives, artificial flavorings, stabilizers, and enhancers weren’t part of the traditional bread-making process. They might help the loaf of bread rise faster and keep it from molding while it sits on a store shelf for several weeks, but they are unnatural additives that aren’t doing our health any good, and in many cases, these artificial chemicals can cause negative reactions in our bodies.

I don’t think of this as one of the main differences between modern bread and traditional bread, but another difference is the fact that modern flour is more heavily refined than traditional flour was. Even though refined flour was still used in traditional baking, it wasn’t refined to the same degree as it was after the invention of modern steel roller milling in the late 1800s.

It’s not really true that all traditional bread was 100% whole wheat because many times old-fashioned flour was bolted or sifted to remove some of the bran (while still leaving some of the bran, the germ, and the endosperm intact). This partially-refined flour was less refined than modern white flour, though, and it was never bleached or bromated or “enriched.”

How I Keep my Bread Traditional

Because of these four reasons, I choose to make homemade bread whenever I can. The way I bake bread is basically the same as the way that my great-great grandmother might have made bread back in the 1800s.

I use heirloom varieties of wheat – usually a blend of organic spelt, einkorn, and barley (you can find those flours here). I also sometimes buy spelt berries and use my grain grinder to get freshly-ground flour.

I use my sourdough starter as my rising agent, and I let my bread rise for at least 12 hours. And, of course, since my bread is homemade, I can pronounce every ingredient in it, and I don’t use any weird chemical additives.

I’d say that probably about 90% of the bread that I eat is traditional, homemade bread, but if I’m eating at a restaurant, I don’t worry about having the occasional dinner roll or slice of cake made from modern flour. It’s all about balance, right? 🙂 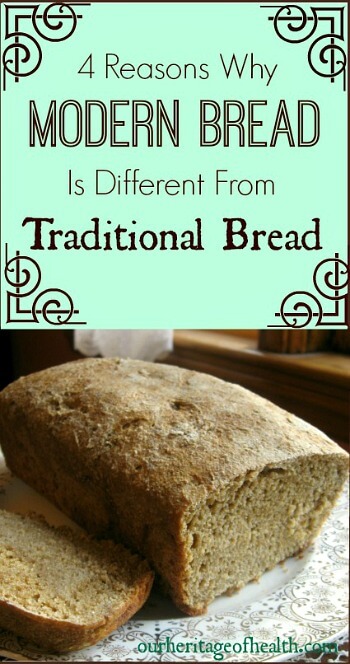 I have been baking bread routinely for some emabarassing ammount of years. Recently I have started baking with Spelt rather than modern red wheats. The results are stunning. It bakes a lighter bread than most modern British bread wheats. It has a superb mouthfeel and the flavour is better too.

Spelt has deeper roots and so it draws up more minerals.

As we know there are two families of gluten. One more extensable (the dough tends to spread and not hold its shape) and the other more elastic. Spelt has a good balance of these and holds it's shape well.

Now it would also be that Spelt would not be sutable for the modern Chorleywood bread making practice for the 'commercial' loaf.

I am now playing with a small woodfired oven now. I haven't worked out why yet, but the bread has a better flavour. It does not taste smokey... It might be the higher level of heat.

You're very welcome, and thank you, too. Yes, I definitely agree that spelt has a really great taste. I've also really been enjoying einkorn lately, too. And that's really neat that you've been trying out a woodfired oven. That's something I'd love to try someday in the future. It makes sense that the bread would turn out well in one since modern electric ovens are so new compared to the amount of time that people have been baking bread in some type of woodfired oven. Maybe it's the higher heat like you mentioned.

Thank you for the information. Nice article. Reason I read it in the first place is I just finished another breakfast with soft, floppy toast made from commercial bread and I decided to search for the reason. I was certain there must be a new additive because I've been making toast for nearly 70 years but in the last decade or so it seems to have lost its crunch when toasted. Your article validates my suspicion, and I am now confident one of those culprits removed the crunch. I guess that means I'll have to find time to bake more of my own bread. My recipe a couple more than the basic ingredients...flour, yeast, milk, water, olive oil, and salt...but still toasts up nice and crispy.

Yes, I agree with you about the floppy toast! Homemade bread might take a bit more time to make, but I think it's worth it!

so what could be done to get rid of harmful varieties in the region where I live for the moment (middle east) Government officials are corrupt and feed their own people with wheat produced in western countries and the even force local farmers to plant the modern wheat.

That's a difficult situation and one that's not easy to fix unfortunately. I'm not sure what could be done to get rid of the harmful varieties that you mention, but you could try to buy better quality wheat for yourself personally anyways.

[…] the farm to when the freshly-baked bread is on your plate, we pay attention to the details, using traditional methods to provide the absolute best flavor and texture. Because we care, we use only high-quality […]

Hi again I have chosen your post as one of my featured post for this week. Please continue sharing your excellent information. Marla

Thank you for the feature, Marla!